The road to Ellora from Ajanta, is in a bad state. We reached Ellora by 4pm and took an auto for about 400Rs for taking around the important caves. As it was already late and we had only about 2hours, so we shortlisted to about 3-4 caves only. Since our cab driver was too lazy to take us over the route, we had decided to go with auto paying extra. Unlike Ajanta, Ellora caves are scattered around a track of over 2km. We started Ellora with cave 29, as our main plan was Kailasa Temple, we kept it for last.
For two reasons it is recommended to visit Ajanta before Ellora, the first being is the chronological order of period of their excavation and second is that the hugeness of Ellora should be felt after the detailing of Ajanta to make the entire journey exciting.
History:  The excavation of Ellora caves started when the builders gradually started shifting to Ellora during 450 – 700 A.D, following the Buddhist trend they continued to construct Buddhist caves at Ellora. The first twelve caves are dedicated to Buddhism, Later on when Buddhism started to decline in India, Ellora seen a transformation with the tradition of Buddhist caves to Hindu caves. The caves 13 to 29 represent Hinduism which were excavated during 650 to 900 A.D. The caves 30 to 34 were excavated during later stages, during 800 to 1000 A.D, which are dedicated to Jainism. Ellora caves are one of the largest rock-hewn monastic-temple complexes in the entire world. Best time to visit these caves are the monsoons, when the waterfalls will be in full glory and also in winter.
The prominent ones of the Buddhist group of caves are cave 2; cave 5, Maharvada; cave 10, Visvakarma; and cave 12, Teen Thal.
Out of the 17 Hindu caves the prominent ones are, Cave 14, Ravana-ka-khai, the demon king of Lanka; Cave 15, Das Avatar or the Ten incarnations of Vishnu; Cave 16, the great Kailasa; Cave 21, Ramesvara; Cave 29, Dumar Lena are of importance.
Lastly the prominent ones of the five Jain caves are cave 32 and 33
Since we didn’t had much time we decided to visit only caves 16, 29, 21 and 32.
The first of them which we visited was cave 29.

This marks as an important excavation at Ellora by the side of “Sita-ka-nahani” a pool created by a waterfall in the Elaganga. The shrine houses a huge linga entered through four entrances flanked by huge dvarapalakas (door-keepers).
The cave is huge with about 50m wide, and 5m high, with 26 giant and exquisitely caved pillars. The excavation was completed during the 7th century A.D.
The halls are adorned with six huge sculptural panels depicting various episodes connected with Lord Siva.
The cave temple has three entrances with lion sculptures on either sides of each entrance.
At the main entrance are the panels Ravananugrahamurti or Ravana Shaking Mount Kailasa (Siva blessing Ravana, the demon King), and Antakasuravadamurti (killing of the demon Antaka).
At the North West entrance are the panels of Nataraja (the celestial dance of Lord Siva), Lakulisa (form of Lord Siva).
At the South East entrance are the panels of Kalyanamurti (the celestial marriage between Lord Siva & Parvati), and Siva & Parvati playing chausar.
This cave also has two enigmatic sculpted depressions, one on south and other on the north. The exact function of these depressions is not clearly understood.

The next one we visited was cave 32, which is located about 1km from cave 29. This cave is double storeyed dedicated to Digambar sect of Jainism, dating back to 10th – 11th century A.D. Through the entrance of Dravidian gopura, is an exquisitely carved monolithic shrine at the center of the courtyard.
The court leads to multiple shrines, two on the west, one on the north and one on the east, dedicated to Mahavira. Through the Main Shrine on the north are a flight of steps which leads to the first floor. The cave was once painted. The pillars on the upper floor are notably beautiful. 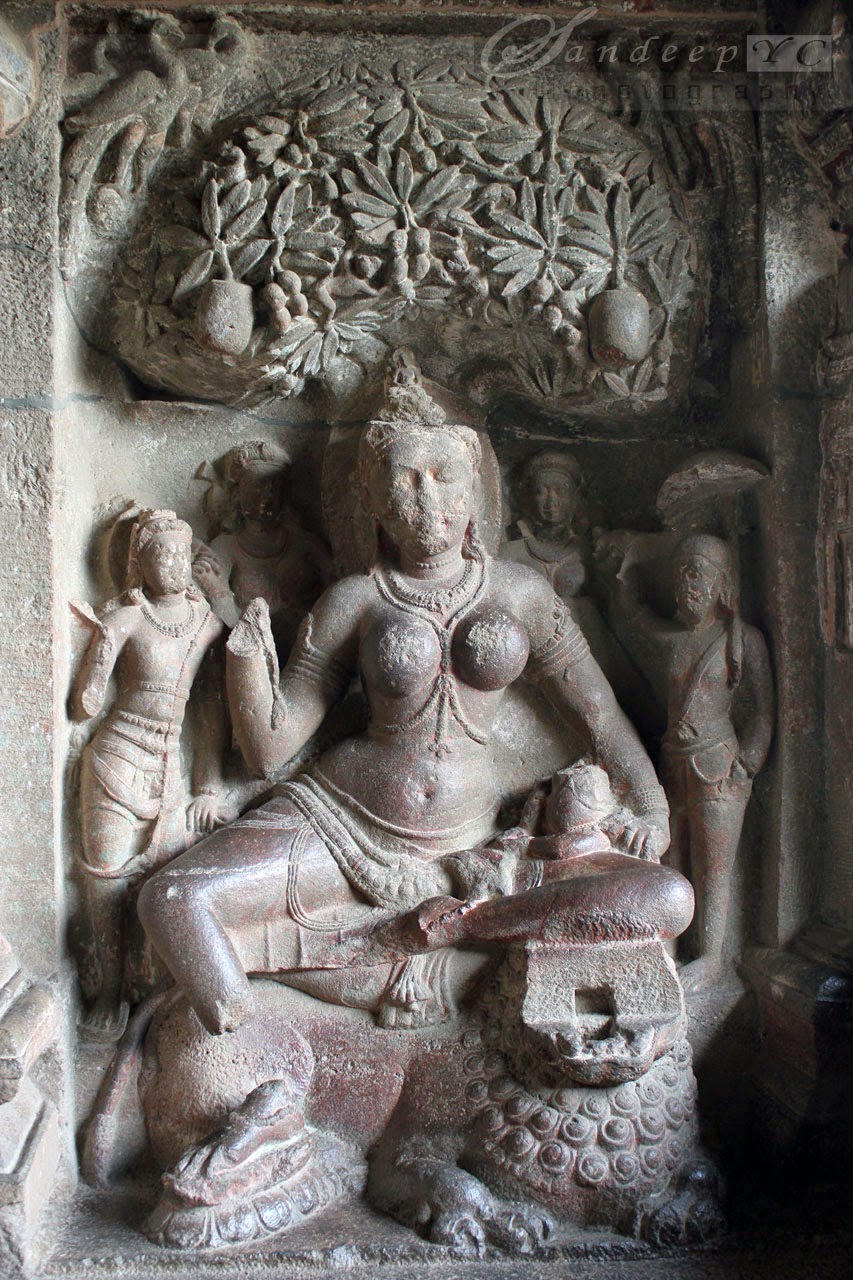 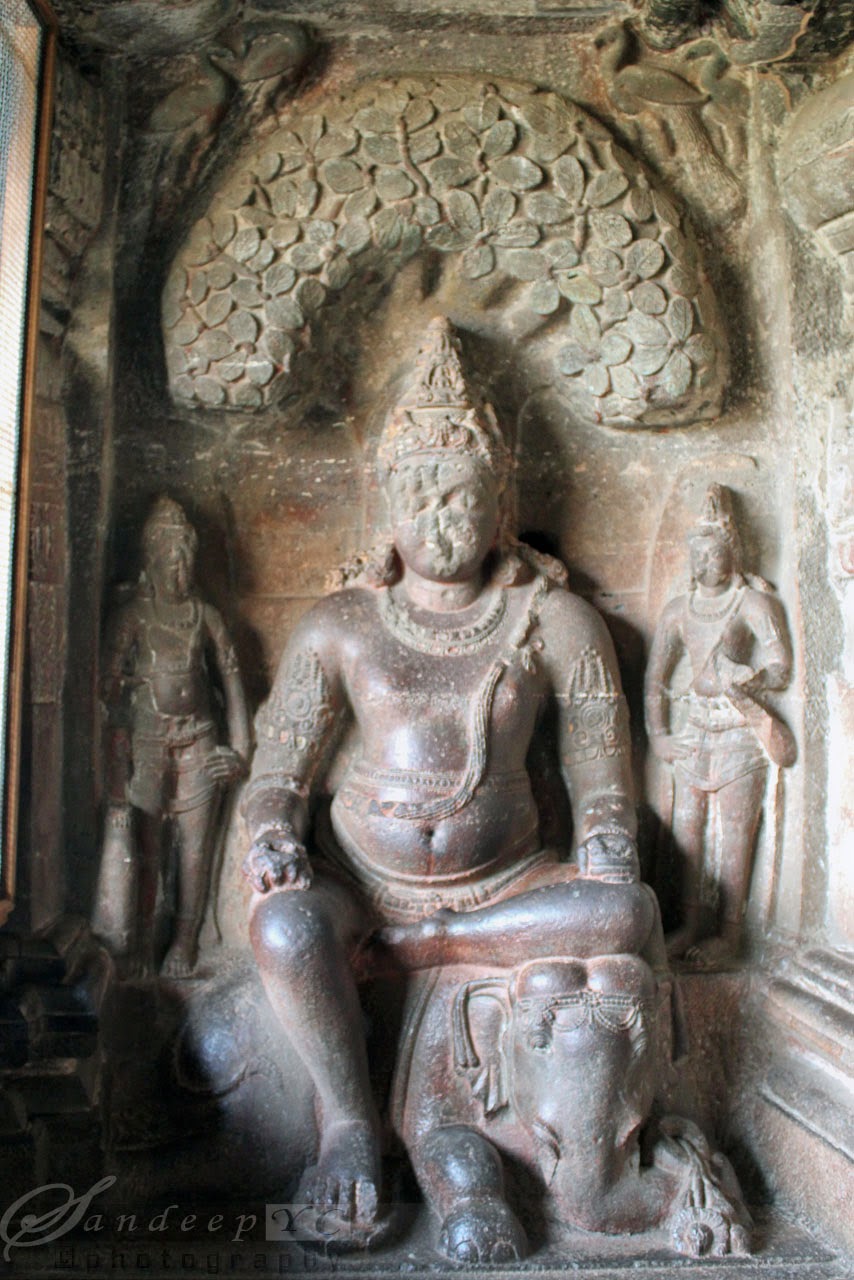 The shrine on the east is unique with its design, the doorframe acting as pillars in lifting the upper weight. 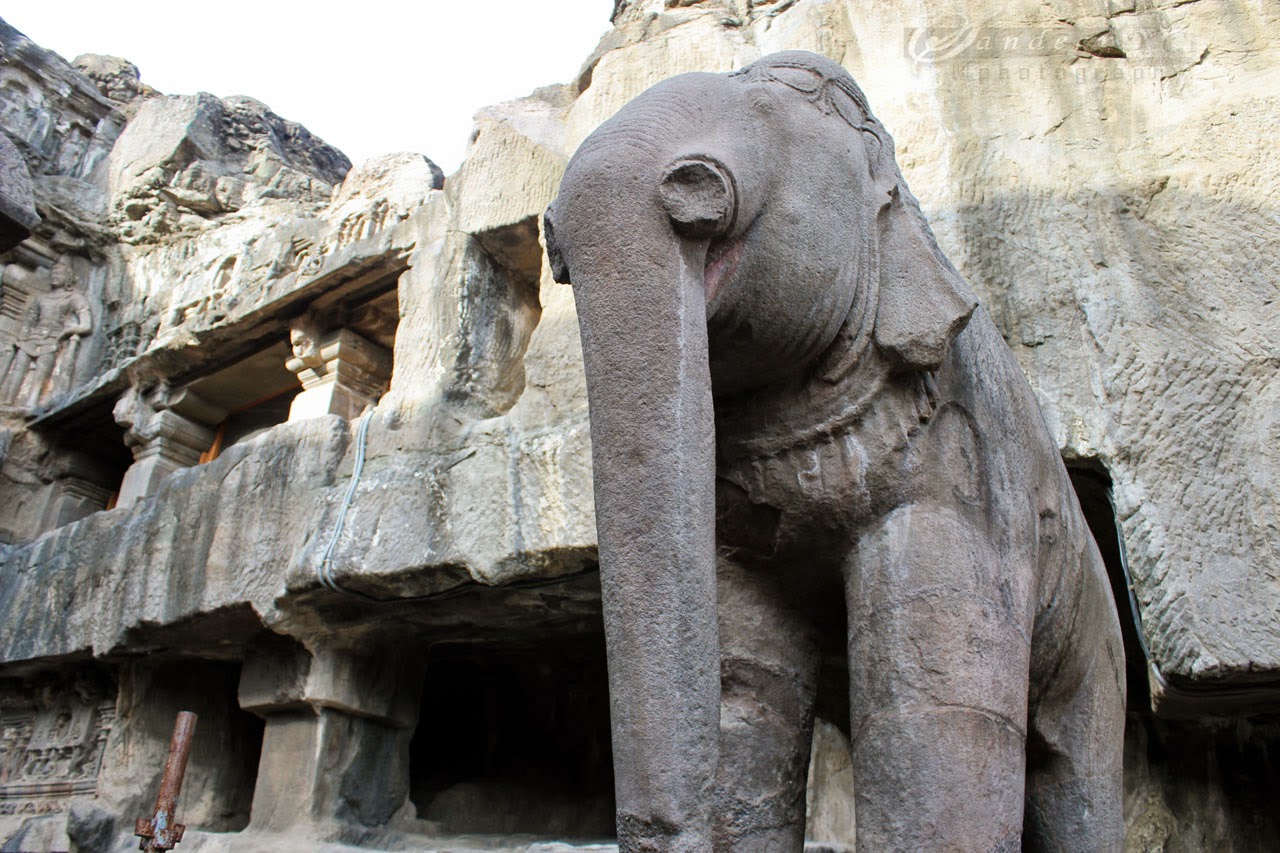 The caves 33, 34 and 31 are lined up along with 32, whereas cave 30 is an unfinished excavation located a distance apart from the rest of the Jain caves, which is also known as mini Kailasa due to its resemblance with the Kailasa Cave 16.

Didn’t spend much time in exploring these, we immediately headed towards cave 21, which is about 1.2km away from cave 32.