Started early for the three island trip, and reached Ross Island at about 10 am. Although we wanted to visit only the Ross Island and were not interested in North Bay and Viper Island, but we were forced to buy the three island trip, as there was no option for only Ross Island trip. To get the tickets for these three island trips were a little messy, so we left the job to the local agents. Unlike the cruise available for Neil and Havelock, here the boats are rather substandard. These are very old and certainly overloaded during peak seasons. They don’t follow any safety measures in providing life jackets for everyone.
There was a recent tragedy took place with one of these tourist boats due to poor safety measures taken and over loading, which took about 21 lives, all of them being Indian tourists.
Due to the low standards maintained for transport to these three islands, most of the foreign tourists stay away and limit themselves with mostly Havelock and also Neil Island.
I would definitely recommend Ross Island as a must see in Andaman but a definite no to Viper Island and North Bay.

The tourist ferry starts from the Water Sports Complex jetty at Port Blair and the journey from Port Blair to Ross Island is just about 15mins. These three island trips take you in a dedicated ferry, which waits at the jetty at Ross Island and gives you only about an hour time to glance the entire Island. One would certainly need about 2-3 hours to go around the island and explore the exceptional natures act. As we had a very little time we didn’t go in deep into the Island and had a small round through the walkway which takes you to the main buildings of the island. The island is distinctive with its unusual conduct of the trees covering the buildings with its roots and standing tall above these structures. The roots have taken about the shape of the buildings itself. This phenomenon makes this Island unique and a must see.
The whole island is maintained by Indian Navy, so you can expect it to be disciplined. 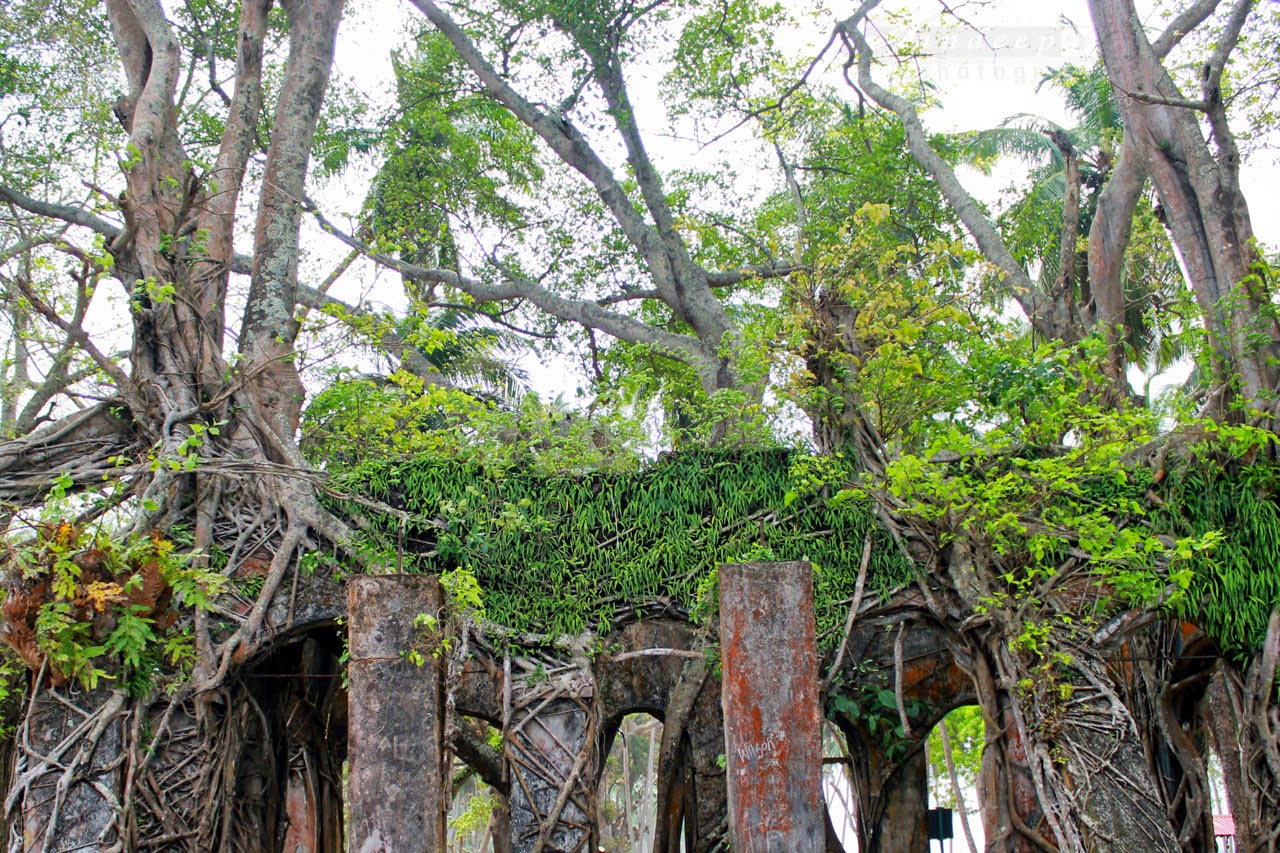 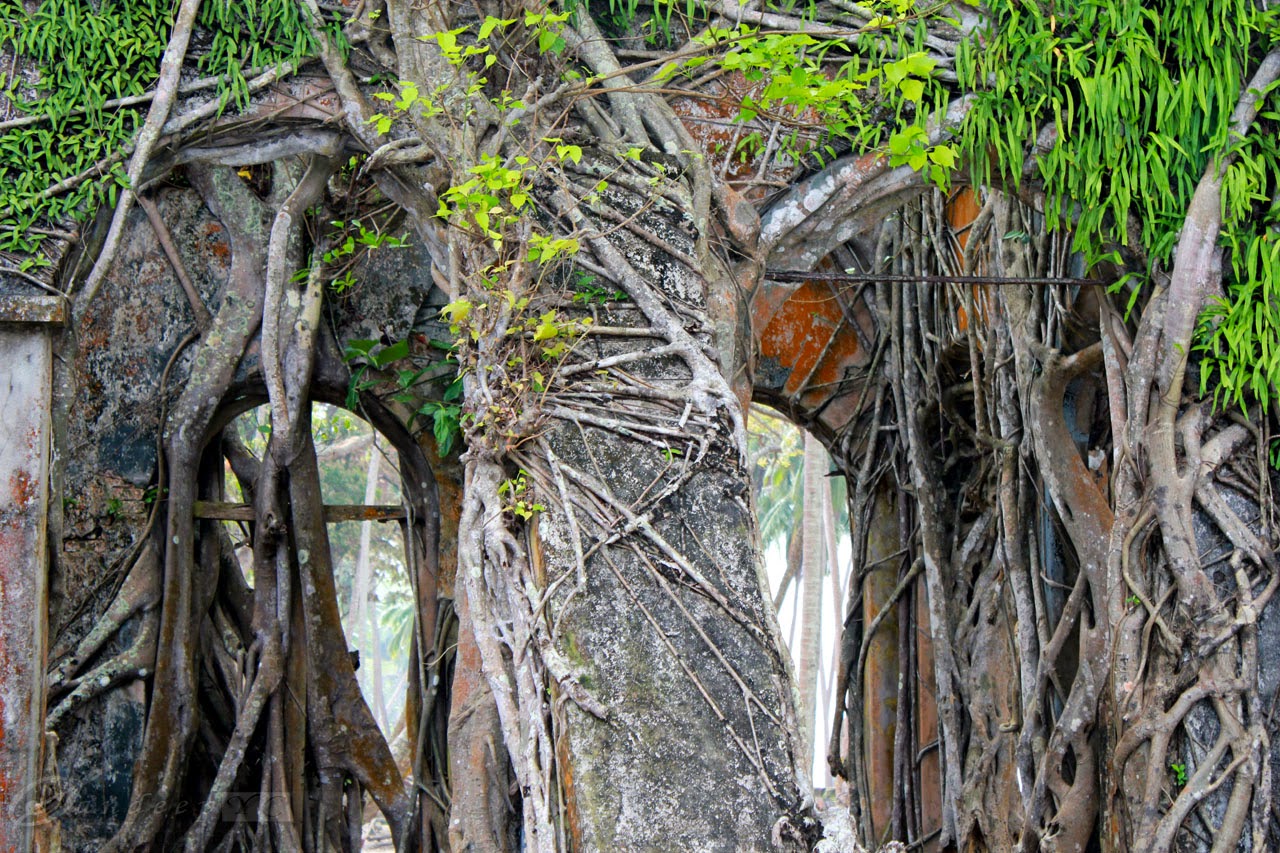 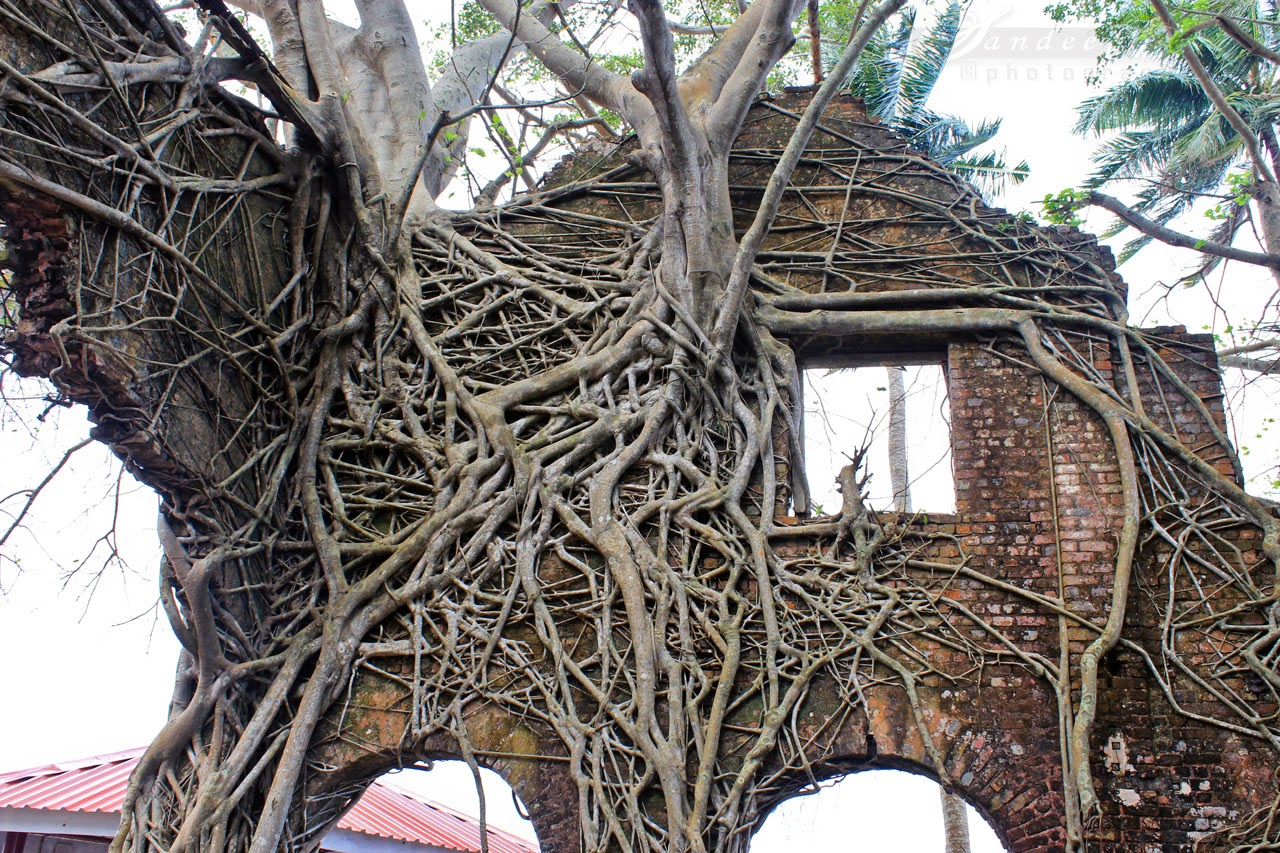 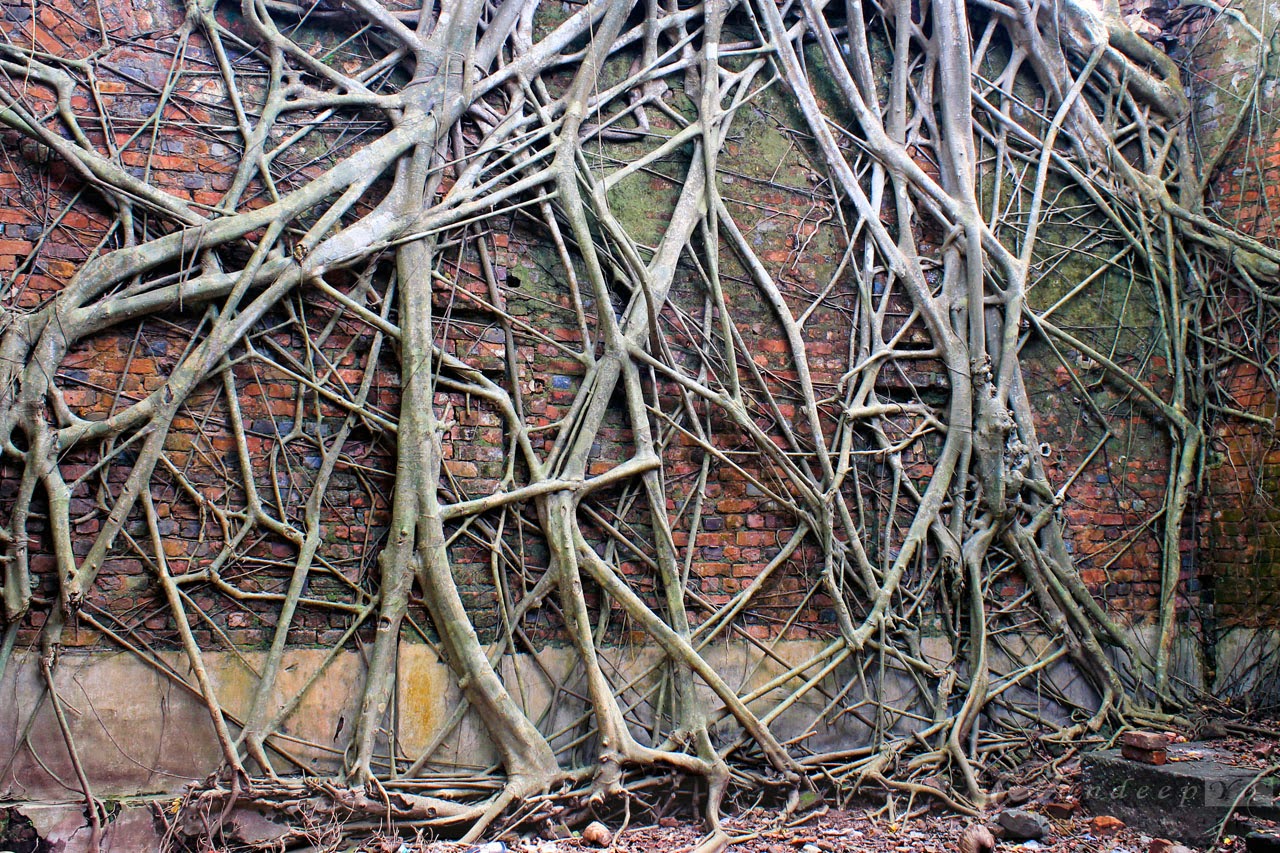 Some useful tourist information:
Open on: all days except Wednesdays
Entry hours: 8.30am to 4.30pm
Toilets: available

The island was full of surprises and a mystery but we didn’t had much time and our ferry was waiting, so had to leave. The island has well maintained gardens with deer and peacock left open on the Island.
It was about 11.30am when the ferry left the Ross island jetty to our next destination Viper island.

It was a long and tiring journey to the Viper Island, and the time given to cover the tiny island was just 15mins, so we decided to stay back in the ferry. The island is of historical importance but not worth the long and tiring journey. Through this extended route we kept glancing ships both container and Navy owned.
We also witnessed the ship repair yard enroute to Viper Island. The return journey was more tiring and again we seen the Ship Repair Yard in another phase of its process. This yard is huge in size, much larger than the largest size of ship it can accommodate, it has huge walls protecting from the sea water, and at one side it opens for the ship to enter inside also allowing the water along. In the next phase it closes the doors once the ship is parked inside, the ship is then fixed and the water is drained out completely, allowing it for servicing and repair work. This process allows the ship repair yard to change its submersion level also, this means when the ship is parked inside the yard filled with water makes the yard in its lowest position in the water, and then after the water is drained out it regains its height above the sea level slowly.
For our surprise the famous cruise ship Europa 2 crossed our way in her route, this cruise ship travels from Colombo to Singapore and in its voyage it stops over at Port Blair for a two day expedition to Port Blair and Havelock.
For more information on this luxury cruise ship refer the below link,
http://www.hl-cruises.com/finder/eux1603/
The total journey time from Ross-Viper-North bay was more than 3 hours.

We were arriving near the North Bay which was our last destination of the Andaman tour, the view from a distance gives you the picture behind the 20 rupee note, which has derived from North Bay and its light house. We reached North Bay by 3pm.
North Bay is a beach which is part of the South Andaman Island, the name is due to its location towards north side of Port Blair and Ross Island. This bay is mostly popular for its corals, and not for its beach, sometimes it is also called as coral beach, because of the vicinity of the corals from the shoreline.
Only thing you go to North Bay is for its corals and the water sports activities available here, earlier it was the hotspot for all the water sports activities like Sea Walk, Scuba Diving, Snorkeling, etc. But now Elephanta beach in Havelock is far more preferred for these activities. Due to its far spread corals very near till the shoreline, the cruise boats are not meant to sail till the shoreline and neither jetty has been able to build. So the ferry’s stop at a distance to the shore and there are glass bottom boats provided to transfer the tourists from the bigger boats to the shore. North Bay is the most commercialized island in the entire Andaman, with its busy shopping streets and water adventure activities. Sea Walk is the most preferred activity here, and many say it is a must do.
They stop here for about two hours, and then the small boats take you back to the ferry in which you arrived here. From the glass bottom ride came to know that the corals in Neil Island was better than the North Bay, due to its extreme commercialization.
The journey from North Bay back to Port Blair was more exhausting, but we were greeted by the moon rise in the clear sky over the mountains of North Bay. We reached Port Blair Water Sports Complex Jetty around 6.30 pm and it was totally dark.

A day trip to Baratang Island or Chidiya Tapu is preferred over this three island trip or even a trip to only Ross Island in the morning and spending the rest of the day in Marina Park, Water Sports complex and the Aquarium.

The last day at Andaman was dedicated only for shopping and to explore the Megapode Resort. Missed again the sunrise from the view point at the Resort. But still got a very picturesque view of the Port Blair and the Phoenix bay Jetty. One could gaze out the ships moving in and out from the Jetty to kill the time. Had a buffet breakfast and started for the Aberdeen bazaar for shopping at the Sagarika Emporium. There are a lot of shops which sell jewels and other decorative items made out of purely sea shells, pearls and other gems and stones found in the Andaman Sea. The shops in Havelock had better designs compared to these shops in Port Blair, whereas the collection was wide in Port Blair. There are very creative stuffs sold here like the bed lamp made from shells, and art work on the Shankhas (Conch Shell), key chains made of seashells etc.
Some of the other places of interest in and around Port Blair include Chatham Sawmill, Anthropological Museum, Mt Harriet, Corbyn's Cove beach, Chidiya Tapu and Wandoor beach.
It was time for our flight back to Chennai and with an unforgettable memories for the life time, it was time to say adieu to Andaman Islands, hope to come back again.

Some of the useful links related to Andaman Islands,
For cruise to Neil Island and Havelock Island:
http://www.makruzz.com
http://www.coastalcruise.in/
For Government run ferries and latest info about Andaman:
http://www.and.nic.in
http://db.and.nic.in/integrated_appln/uploadfiles_dss/nhr.htm