Cave 8:
Unfinished and of less importance. It is located at the lowest level. Major portion of the frontage has been swept away due to landslide. It was locked when we visited, must be housed with generators.

The second oldest Chaitya griha (Prayer hall) belonging to Hinayana phase of Buddhism datable to 1st century B.C. The Chaitya with its well-balanced façade is divided into a nave, an apse and aisles by a colonnade of 23 pillars. At the center of the apse stands a plain globular Stupa on a high cylindrical base. The most beautiful part of this cave is its façade wall, decorated with a beautiful horse-shoe shaped chaitya-window and figures of Lord Buddha.
The paintings in this cave are done in two phases, one in 1st century B.C and the latter in 5th-6th century A.D. The pillars and ceilings are decorated with paintings of Buddha and floral decorations while the walls are decorated with figures of Lord Buddha, groups of votaries, procession of devotees towards a stupa. Most of the paintings here are in ruined state, but one can have traces of the pre-Christ period paintings.
Below is one of the partially preserved paintings found in cave 9

Adjoining to the façade adds another beauty of four open cells with sculptures, giving a look of a showcase.

This is the oldest Chaitya griha (30.5 x 12.2m) at Ajanta, belonging to Hinayana phase of Buddhism dating back to 2nd century B.C. First spotted by the modern world among the Ajanta caves. The huge 45ft façade is the largest at Ajanta.

This chaitya very similar to cave 9, is apsidal on plan consisting a nave flanked by two aisles by colonnade of 39 pillars. The stupa placed at the apsidal end, is the biggest at Ajanta with plain and hemispherical in shape. The ceiling is vaulted (arched) and originally fitted with timber rafters.

The importance of this cave lies in its preserving the early specimens of Indian paintings. These paintings belong to two different periods, the earlier dated to 2nd century B.C and the latter to 4th century A.D. The plain octagonal pillars, ceilings and walls are painted with Buddhist images, designs and Jatakas, but nothing substantial has survived. A Brahmi inscription on the façade dated to the 2nd century B.C. reads ‘Vasithiputa Katahadi’, who gifted for excavation. 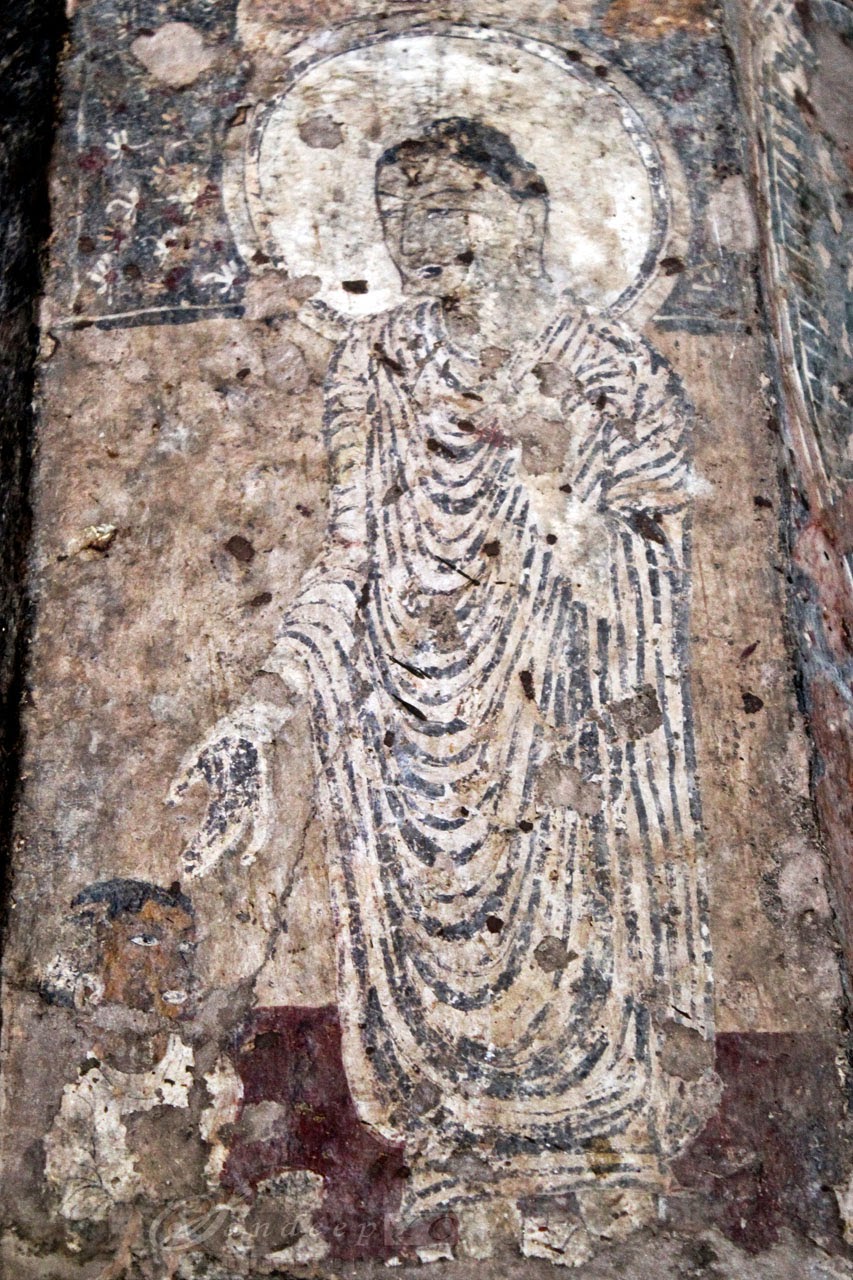 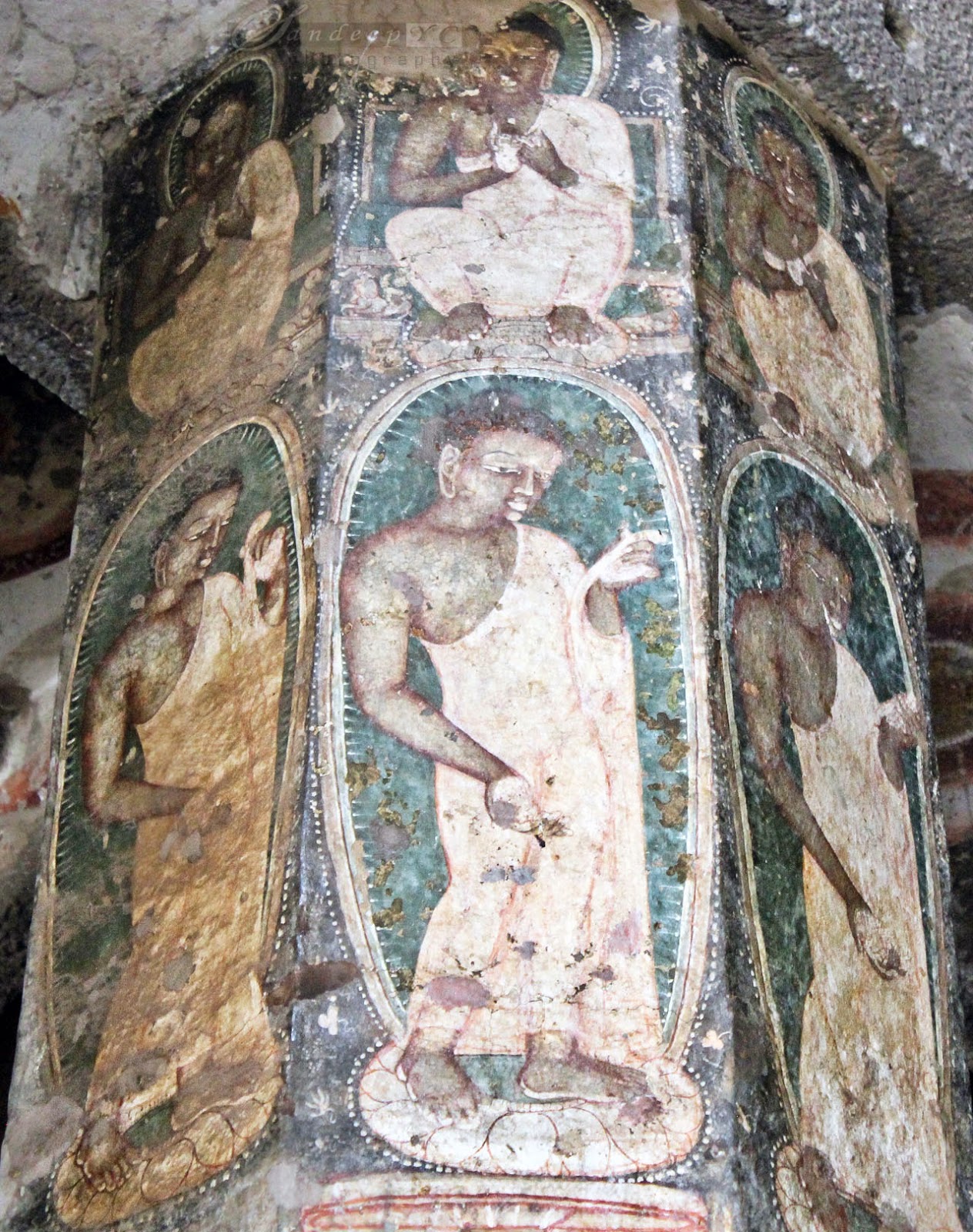 Cave 11:
This monastery (19.87 X 17.35 m) datable to beginning of fifth century A.D. and is the earliest Mahayana cave. It consists of a hall with six cells and a long bench, a pillared verandah with four cells, a sanctum sanctorum. Buddha in preaching attitude is housed in the sanctum against an unfinished stupa. Few paintings that available here depicts Bodhisattvas, figures of Buddha. The paintings in this cave are almost to extinction, the paintings are visible right from the entrance on the verandah also. The paintings in this cave are not much preserved and left untended.

The caves 12-15 are not of much importance and can be skipped.
Cave 12:
This Hinayana monastery consists of a hall (14.9 X 17.82 m) the front wall is completely collapsed sided by twelve cells arranged on three sides. An inscription on the back wall of the monastery records the gift of this cave by one merchant Ghanamadada and palaeographically datable to 2nd – 1st century B.C. perhaps slightly later than Cave 10.

Cave 13:
This is a small monastery and belongs to the first phase and is of not much importance.


Click below for my experience on Ajanta & Ellora
Ajanta Paintings Cave 1,2
Ajanta Cave 4,6,7