Cave 15:
Mahayana Buddhist cave standing without pillars, this is currently used as a shop.

According to an inscription found here, the excavation of this cave was caused by Varahadeva, the minister of Vakataka king Harishena (circa A.D. 475-500). The cave (19.5 X 22.25 X 4.6 m) which is a monastery consists of a central hall supported by 20 pillars, surrounded by 14 cells on three sides, vestibule and a sanctum for Buddha image.
The important painted themes depicted are the conversion of Nanda; death of princess, Miracle of Sravasti; Maya’s dream; and certain incidents from the life of Buddha. The Jataka stories depicted are Hasti, Maha-ummagga, Maha-sutasoma. Painted inscriptions can also be noted inside the caves.

This cave is famous for its beautiful paintings, next only to cave 1. A Brahmi inscription, on the wall of the courtyard records the excavation of this cave by a feudatory prince under Vakataka king Harisena (475 – 500 A.D). Twenty octagonal plain pillars mostly painted, support the hall. The doorframe is carved and painted. The verandah of this cave has one of the finest and vibrant colored paintings, and you can see protective curtains dropping in front of the cave for protecting from sunlight and rains.
Some of the important Paintings outside the cave in the verandah are the seven Mortal Buddha’s, wheel of life, Vessantara jataka, etc.
Seven Mortal Buddha’s: The lintel of the main door portrays seven Mortal Buddha’s along with the future Buddha ‘Maitreya’. Their names from the left are Vipasyin, Sikhin, Visvabhu, Krakuch-chhanda, Kanakamuni, Kasyapa, Sakyamuni. Below these Buddha figures, there are the eight couples in different seating postures.
A huge and gigantic wheel representing the ‘Wheel of Life’
The cave houses some of the well preserved paintings of the Vakataka age that includes flying apsara (to left of door), subjugation of Nalagiri (a wild elephant) by Buddha at Rajagriha, Buddha preaching to a congregation. The Jatakas depicted here are Chhaddanta, Mahakapi (in two versions), Hasti, Hamsa, Vessantara, Maha-Sutasoma, Sarabha-miga, Machchha, Mati-posaka, Sama, Mahisa, Valahass, Sibi, Ruru and Nigrodhamiga.
Below are some of the prominent paintings on the walls of the cave 17, 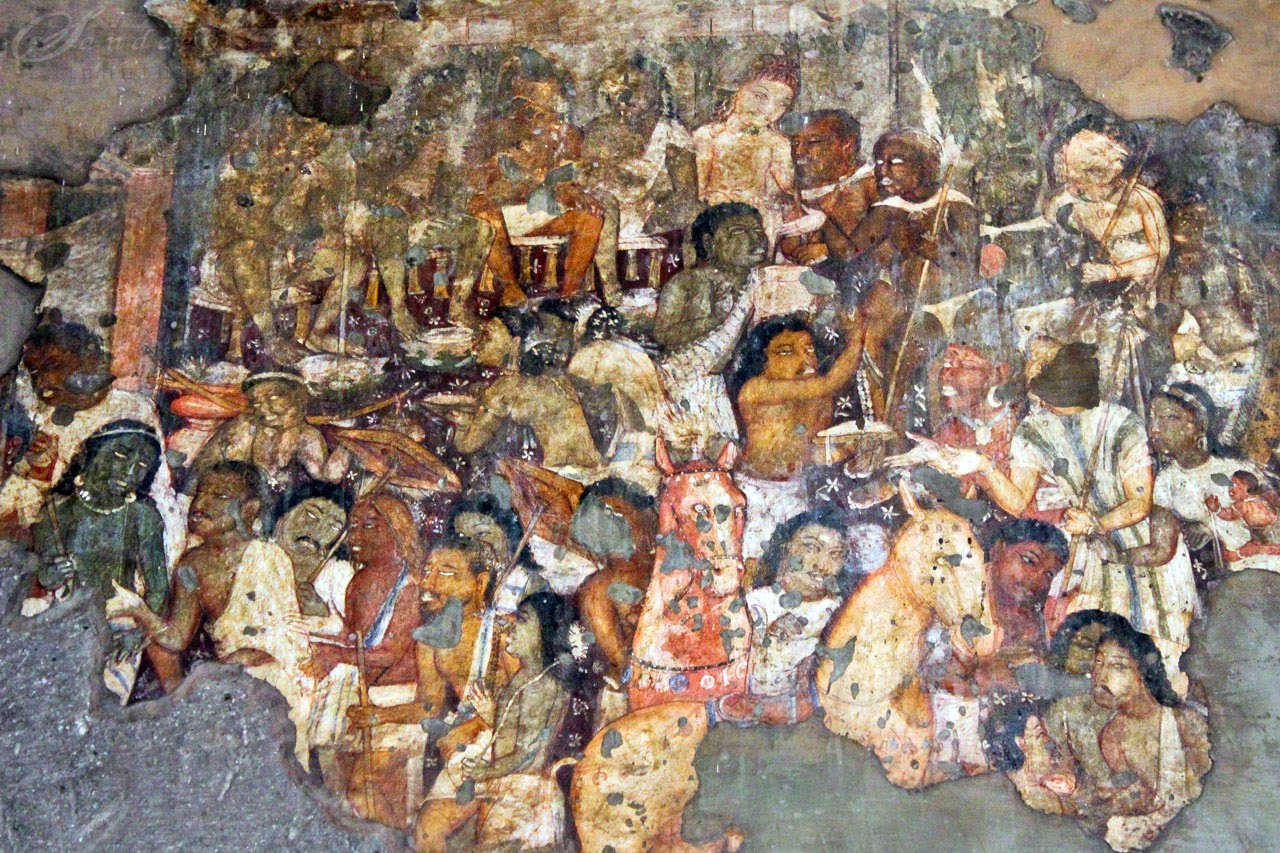 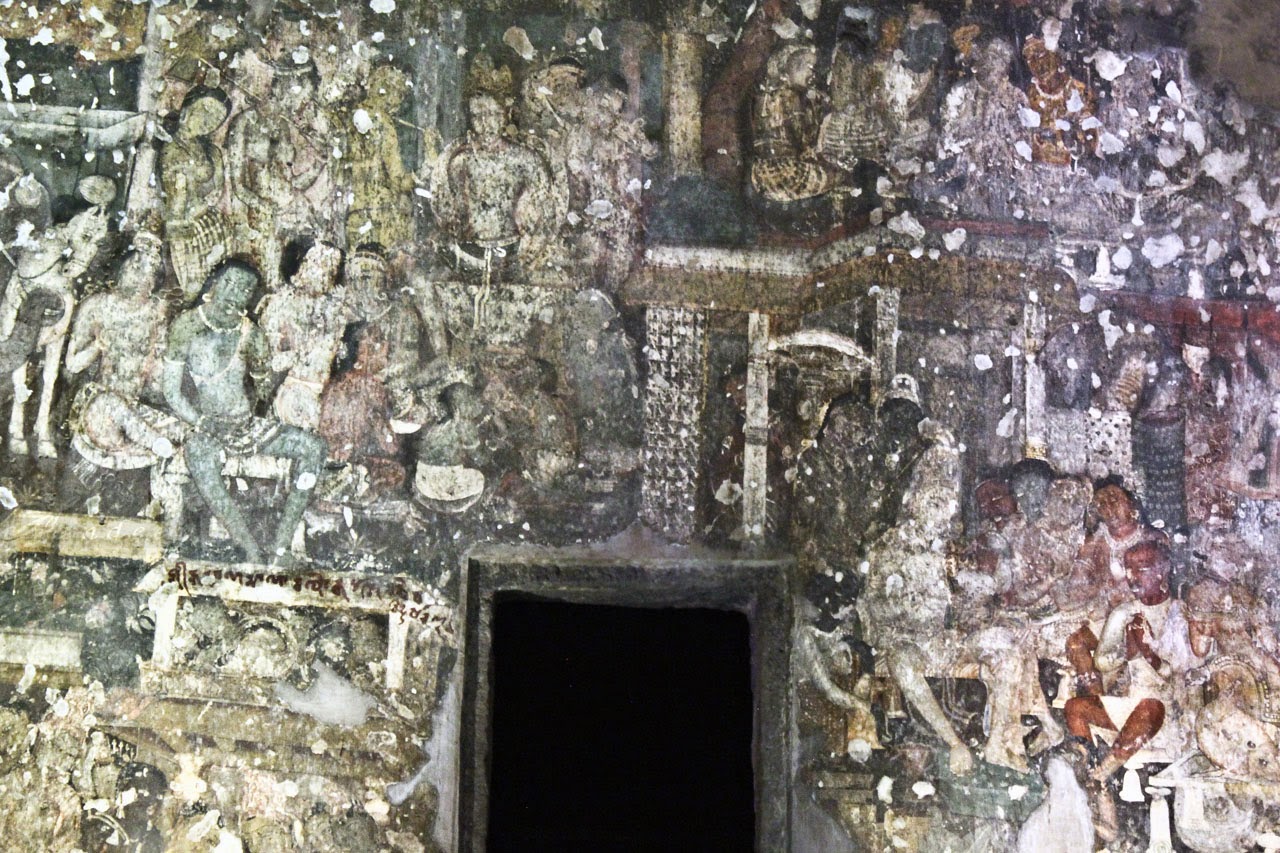 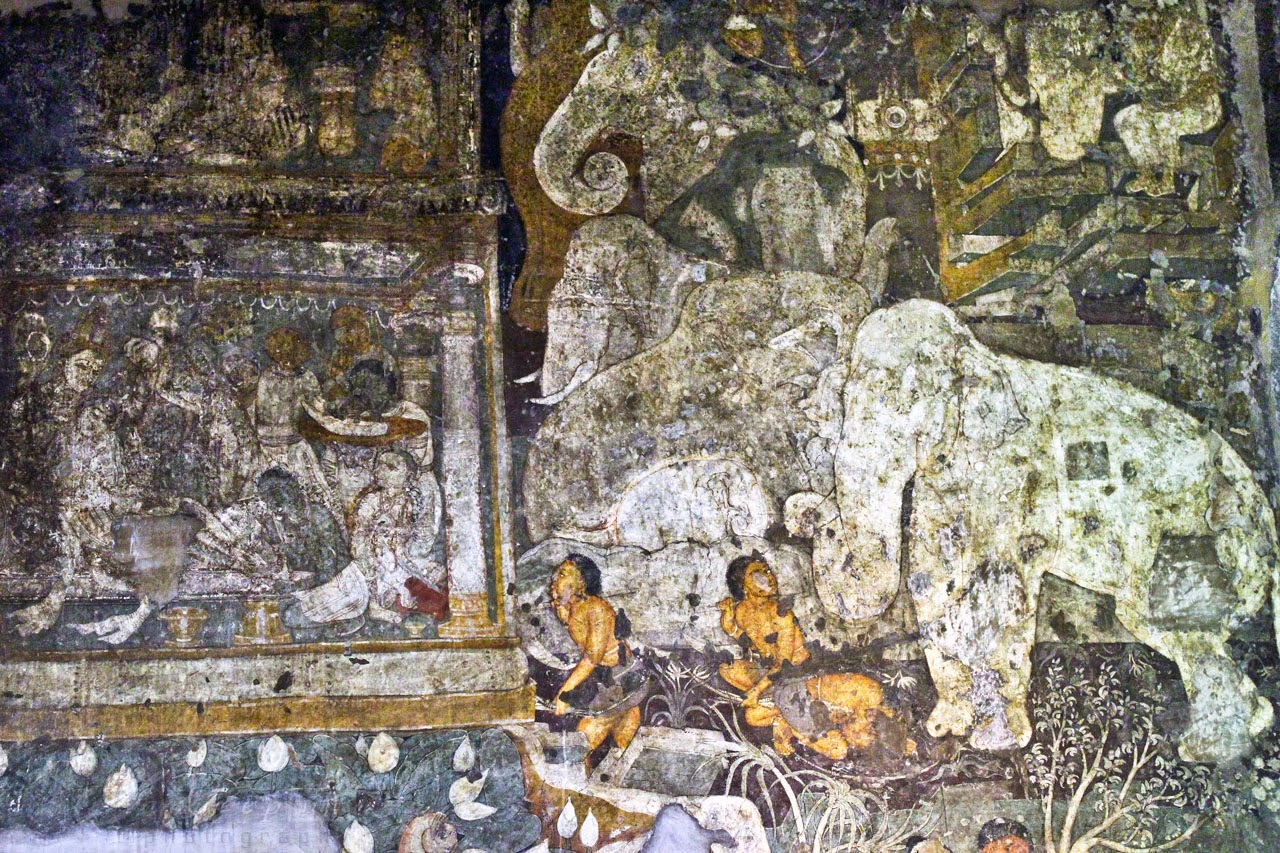 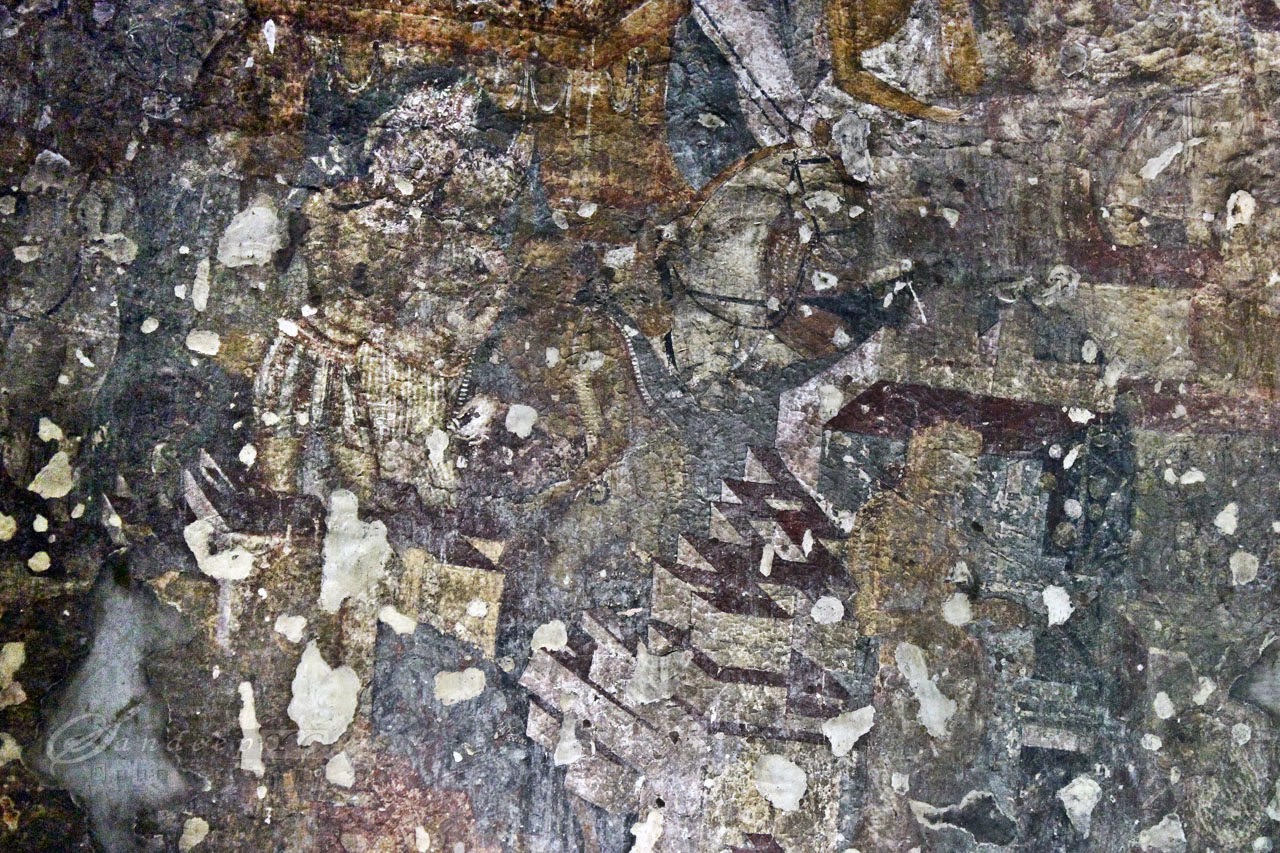 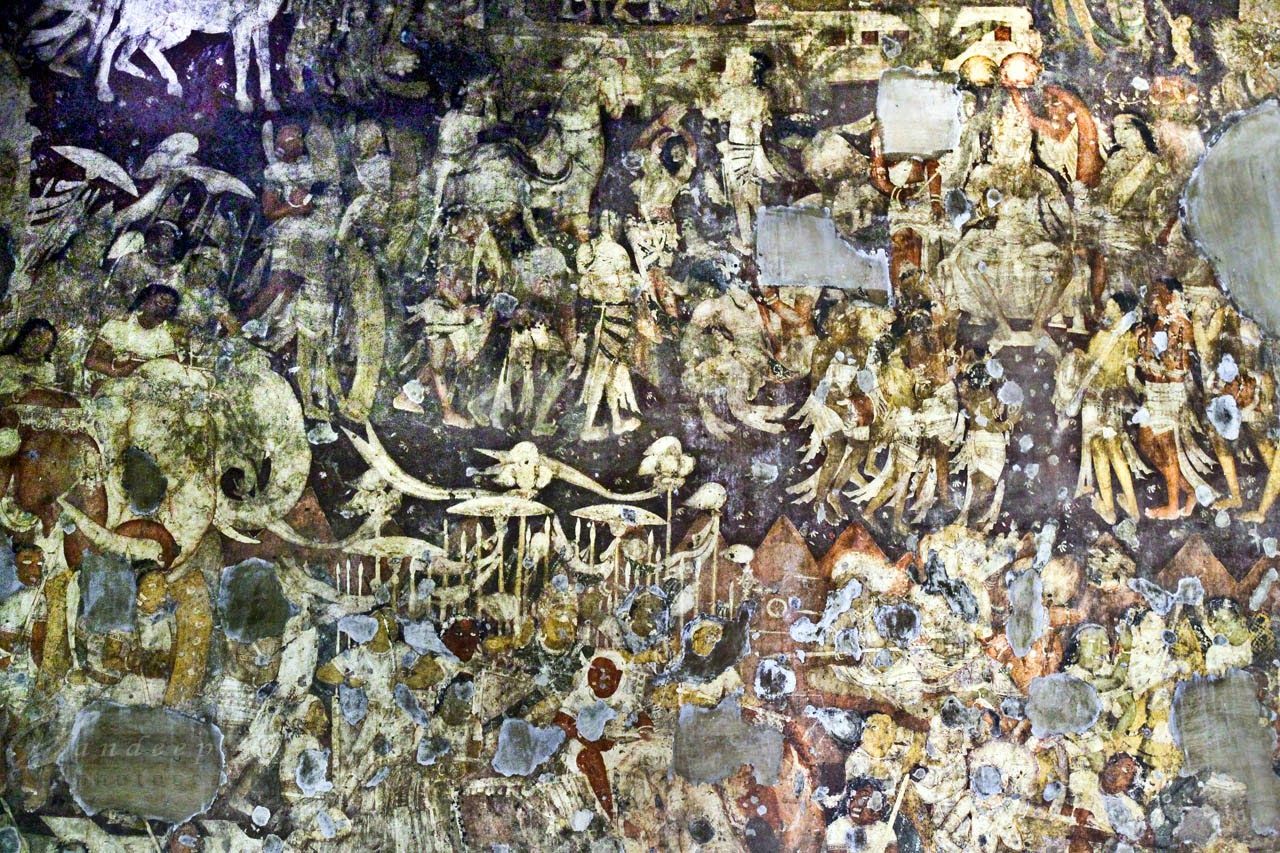 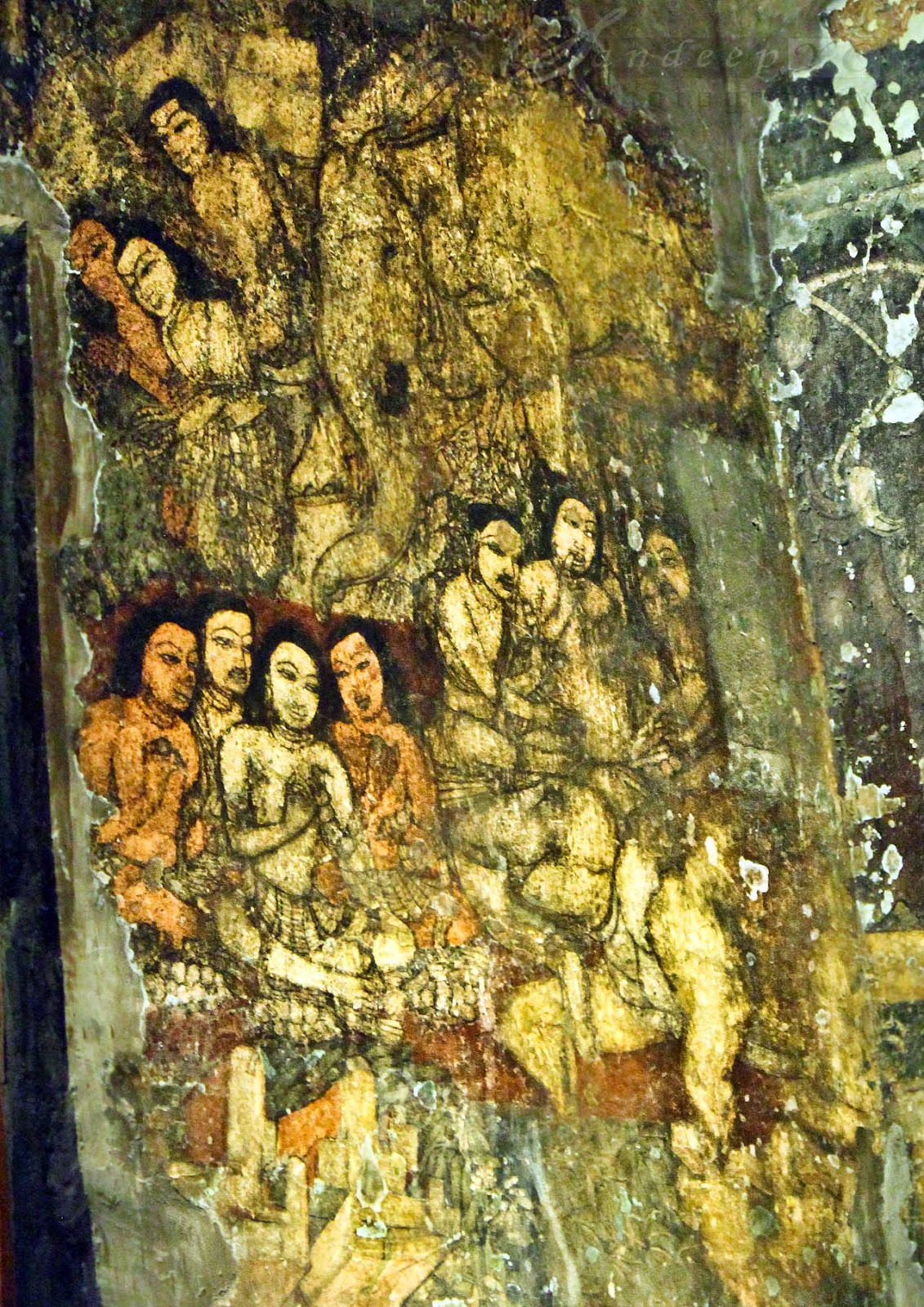