Towards the Boompjes is a white building Willemswerf, designed by the Amsterdam architect Wim Quist. It has a facade with an interrupting sloping glass diagonally over the full length of the façade, dividing the structure into two parts as it appears from front.
Just beside the Willemswerf is the Red Apple, which is 124 m high are 40-storey residential skyscraper. Red Apple is designed by KCAP Architects & Planners and Jan des Bouvrie and was completed in 2009. The facades are designed with bright red anodized aluminum with small shifts relative to one another.
Adjacent to Red Apple is Waterstadtoren which is about 108.88 m high and is constructed in 2004. It was designed by HM Architekten.

Through the Boompjes is another popular building De Maas.
Walking down the Boompjeskade at the waterfront, gives a spectacular view of Noordereiland and the skyscrapers of the Kop Van Zuid overlooking Nieuwe Maas.

This is a small neighborhood of Rotterdam on the south bank of Nieuwe Maas connected by the famous Erasmusbrug. Most of the popular skyscrapers of Rotterdam are located around this area. Some of the significant ones are, De Rotterdam, Montevideo, Maastoren, New Orleans, De Brug, World Port Center, and the KPN Tower.
From left is the Maastoren-KPN tower-De Rotterdam-Erasmusbrug-Montevideo-World Port Centre.

The view from Boompjeskade is amazing with a panoramic view of the skyscrapers along with the Erasmus Bridge and the Nieuwe Maas. Best of all is sitting and gazing around the ships and cruise boats passing by the Nieuwe Maas during the evening hours until sunset.
De Rotterdam is designed by Rem Koolhaas in 1998, and was completed in 2013. It has 44 floors with an approximate total area of 160 000 m² (1,722,226 sq. ft.), allegedly making it the largest building in Europe.
The design of the building is unique with a common base of 6 floors and then rises three towers, which are moved by few meters in different directions, which enhances the wind stability and provides space for terraces. 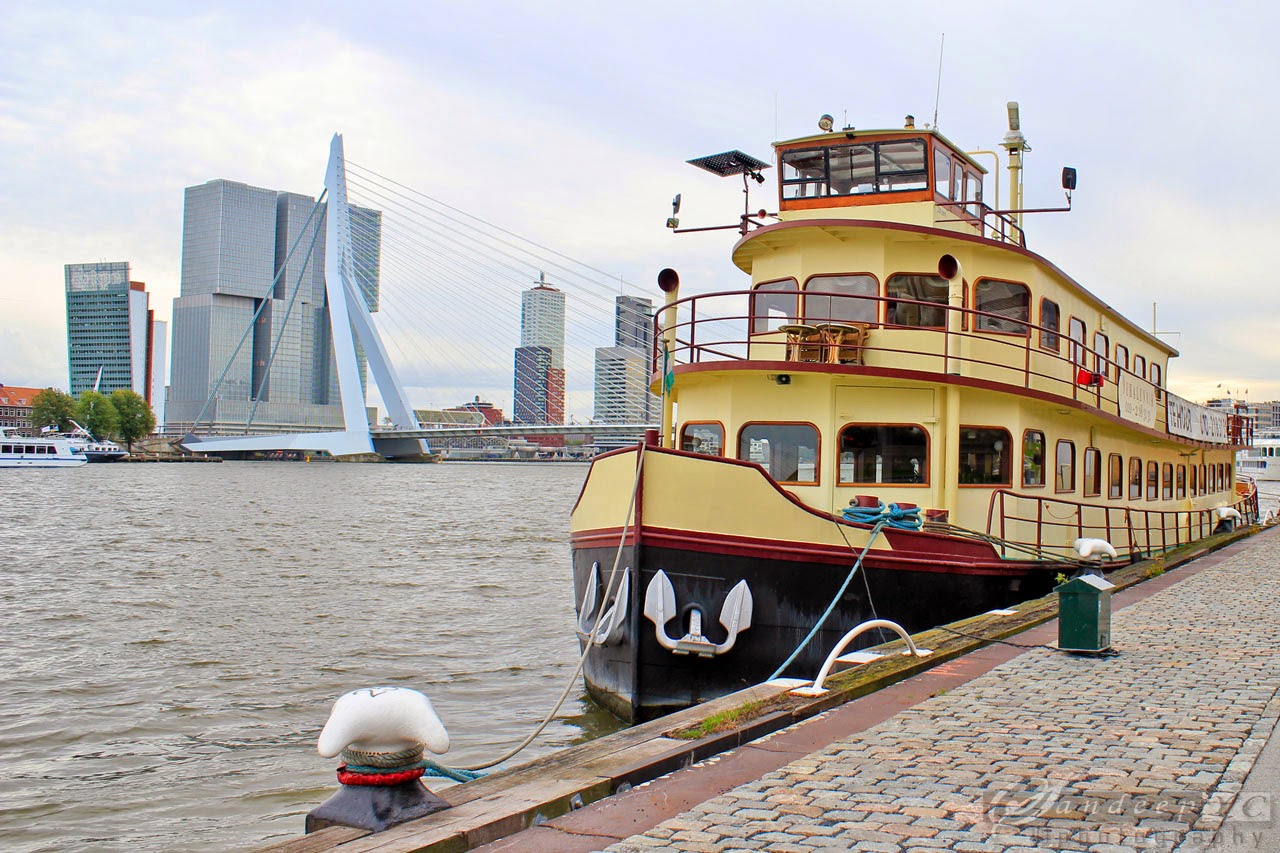 The cable-stayed bridge Erasmusbrug is built across Nieuwe Maas river connecting north and south Rotterdam. The bridge is designed by Ben van Berkel and was completed in 1996.
It is about 802 m long and 139 m in height and has single asymmetrical pylon in the shape of a swan, so it is sometimes termed as "The Swan". There is a bascule bridge at its southern end to allow ships to sail through which can’t pass under the bridge.

Click below for more on my Netherlands experience,
The canal district of Amsterdam
Amsterdam Nightlife
Explore Amsterdam by walk - Part I
Explore Amsterdam by walk - Part II
The Royal Zoo of Artis - Part I
The Royal Zoo of Artis - Part II, Butterfly Park & Aquarium
Miniature city of Maduradam
The city of Hague
The city of Modern Architecture - Rotterdam - Part I
An Evening in Utrecht
Location: Kop van Zuid, Rotterdam, The Netherlands