Entrance:
There are totally 4 doorways for the temple out of which the south door is of most importance. The entrance looks similar to that of the Belur, and is a true Hoysala style of architecture, with two model shrines on either sides of the door and the Lintel being exquisitely carved with small sculptures on them.
The most beautiful sculpture in Hoysaleshwara temple were the two sculptures of Dwarapalakas at the south door of the temple, it has the most elaborately carved ornaments  on both these sculptures.
Sculptures:
There are 240 large sculptures on the walls of the temple, out of them the most significant ones being the Shiva and Vishnu images.
The avatars of Vishnu include Varaha, Narasimha, Vamana, and Krishna. And there are many Shiva sculptures found on the walls.

1. Varaha
This relief of Varaha seems to emphasize his fierceness against the conquered demon, rather than his tenderness towards the rescued goddess.
The fineness of the carving, which is deeply undercut and encrusted with ornamentation in the best Hoysala style, is characteristic of most sculptures on the temple.


2. Narasimha
There were many images of Narasimha out of which im showing you two of them below 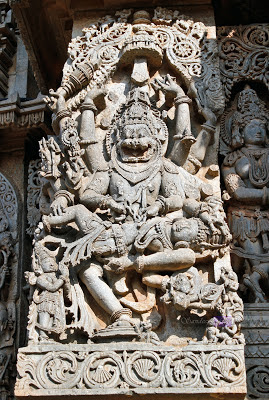 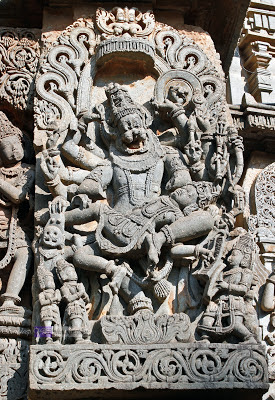 3. Vishnu Trivikrama
Vishnu takes a giant step to reclaim the universe, as Garuda worships to his right. Brahma (with three heads) appears beside Vishnu's right foot, indicating that in this step Vishnu has covered the heavens.


4. Garuda
There were two images of Garuda which i found here. The first one is the Garuda, who as a bird is the traditional enemy of snakes, fights a pair of nagas.
The second one was on another here also you can notice the wings on the left side of the pic.
5. Shiva
Shiva dances powerfully on the body of a demon, which he tramples under foot.


6. Shiva
A fierce manifestation of Shiva dancing on a demon. Shiva holds multiple weapons, a snake-entwined skull staff (photo left), and a drum (photo left, above Nandi). A corpse appears to the right edge of the photo. At the upper right of the photo, Shiva spears a small enemy with his trident.


7.Shiva & Parvati
The right image is of Shiva Parvati on Nandi 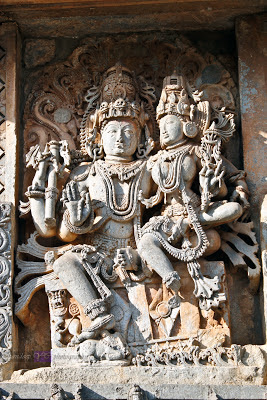 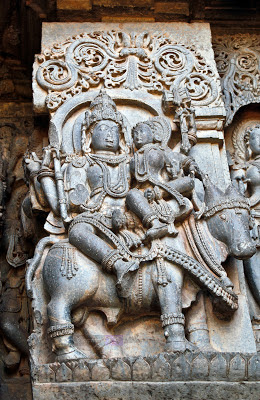 This image is a stunning amalgamation of gentle Bhikshatana and fierce Bhairava, both forms of Shiva. The sandals belong to Bhikshatana, the other attributes to Bhairava. In the lower right, two figures seem to represent a Brahmin trying to keep his wife away from Bhikshatana. The figures may be interpreted as emaciated aescetics (Bhikshatana), as corpses (Bhairava), or - as so often in additive cultures like India's - as both. Overall, the fierce expression and imagery of Bhairava clearly dominate this sculpture, which I would characterize as Bhikshatana assimilated into Bhairava.
10. Ganesha
11. Lakshmi Narayana
12. Ravana lifting Kailasa

Ravana Lifting Kailasa mountain, Similar to that of the Belur.
So much of details can be seen here, with Shiva - Parvati sitting on Nandi on top of the mountain.
13. Arjuna
14. Durga Mahishasuramardini
Durga, armed with the weapons of all the gods, slays the buffalo demon Mahisha. 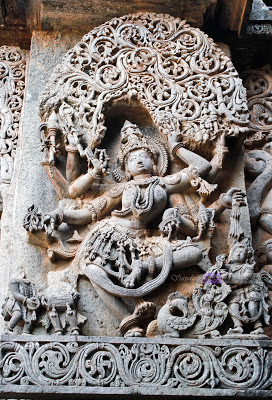 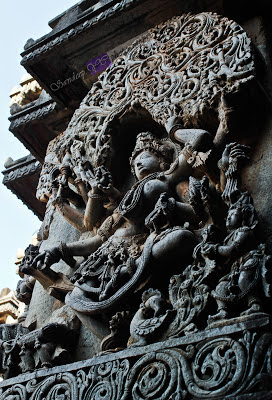 There was a large panel of sculptures of Gods and Goddesses, seven in total, and i suppose the most unique of them all. All of these images were on top of the wall, unreachable from ground.
There was another panel with series of images which includes a madanika also along with the Gods
I'm pasting here the rest of the images which i felt were also important... 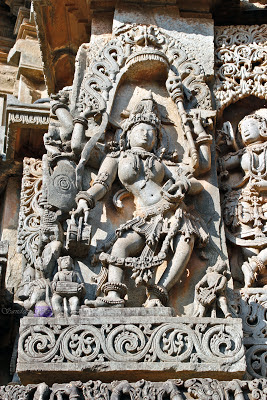 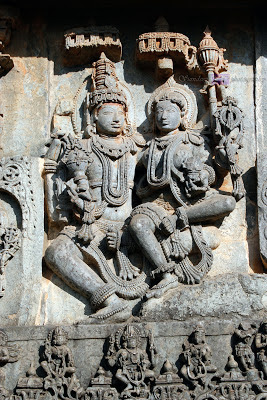 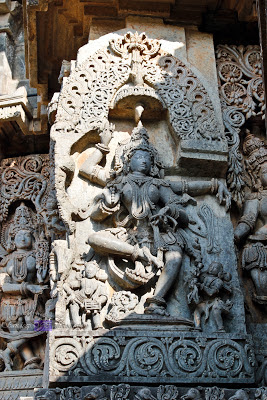 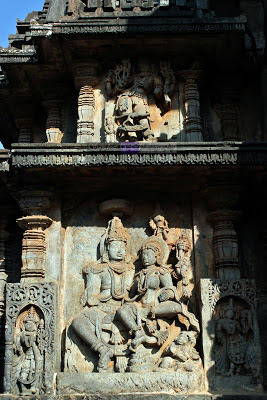 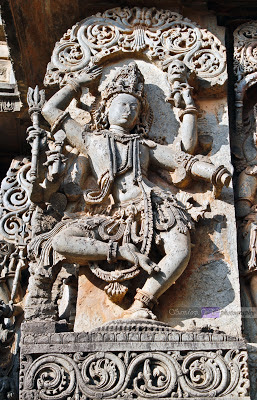 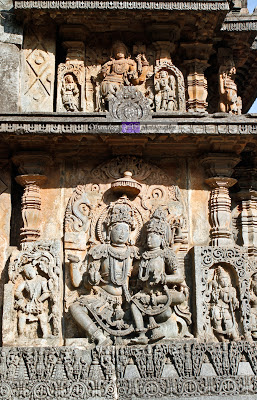 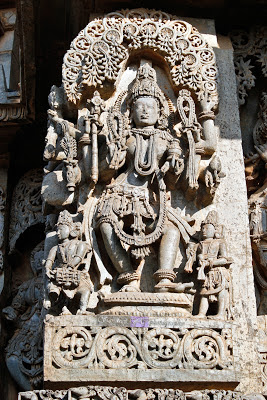 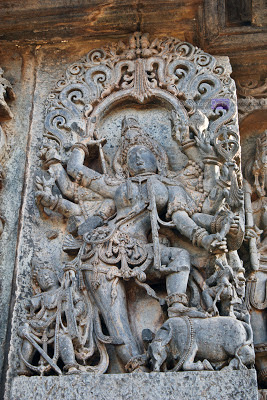 Some more images of the walls of the temple 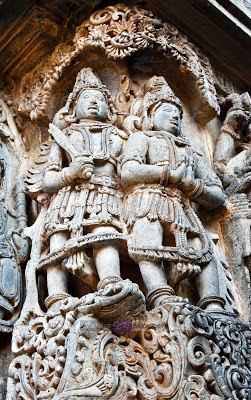 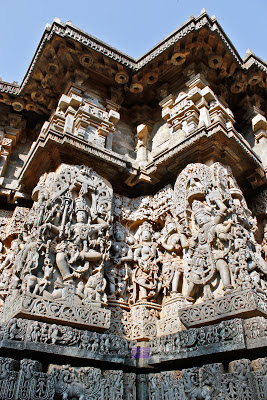 Apart from these sculptures there were two Nandi mantapas attached to the temple and an Archeological museum in the campus which i'll be detailing in the following post.