As Badami, Aihole and Pattadakal are famous for there early Chalukyan ancient architecture with large temples and sculptures, so is Lakkundi famous for the later Chalukyan architecture with intricate carvings and door frames.
Since from my last visit to Badami, Aihole and Pattadakal, I was pretty much interested to visit Lakkundi while going to Badami, but unfortunately couldn’t make it up. But more fortunately I got an opportunity to stay in Gadag for some work, so decide to visit Lakkundi temples and also Trikuteshwara temple in Gadag, but later was only able to visit Lakkundi due to time constraint.

Some facts about Lakkundi: Lakkundi is in Gadag District (North Karnataka) of Karnataka is a tiny village on the way to Hampi (Hospet) from Hubli. Lakkundi is 11 km from Gadag in the east. It is 15 km from Doddabasappa Temple of Dambal and 25 km from Mahadeva Temple of Itagi and 50km from Sri Someshwar Temple of Lakshmeshwar(40km from Gadag).

Currently Lakkundi claims to have about 50 temples of various stature and antiquity. Some of the temples of note are Manikeshwara Temple, Suryanarayana Shrine (of Sun God), Kashivishwanatha Temple, Nanneshwara Temple, and Brahma Jinalaya. Most of them are dedicated to Lord Siva and his various aspects. Most of the tourists who visit Hampi and Pattadakal often miss out this amazing place which is on the highway itself, but the ones who take the extra bit of effort visiting this place is never disappointed. Lakkundi is also famous for its stepped tanks (Kalyani); most popular among them is the stepped tank at Manikeshwara temple called as Musukina Bhavi.

Back to Travelogue: It was 24th Dec, 2012 on Monday for a change I was on a trip rather working in office, and we decided to go to Lakkundi first which was just 11 km from Gadag city. There are plenty of buses plying from Gadag old bus stand to Lakkundi, many special buses are also there just for Lakkundi and also many other buses which go via Lakkundi including Hospet and Koppal buses. So I suppose you should get a bus in every 10-15 mins. In just 20-25 mins we reached Lakkundi bus stand and as soon as we got down we were surrounded by the auto drivers who were looking pretty much pissed off due to low visitors visiting since it was a weekday. They offered me 300 Rs to cover entire Lakkundi which included around 11 temples according to them, but finally managed to settle down at a 70 Rs for covering only two temple complexes which had just above 2.5 km as total distance covered. There is Manikeshwara temple and a stepped tank right behind the bus stand, on the other side of the town, which we thought to cover at the last.

Kashivishwanatha/ Kasivishveshvara Temple: The first one which we visited was Kashivishwanatha Temple dedicated to Lord Shiva built in 11th century A.D., which is just about 1 km from the bus stand, although there is no entry ticket for this temple but it is still undertaken from Archeological survey of India (ASI). The place is well maintained by the government and is a protected monument. The complex consists of Kashivishwanatha Temple and Suryanarayana temple opposite to each other and also Nanneshwara Temple on the other side of the road.
We opted for a guide here who took us inside the temple which is otherwise locked to protect it from other public. Felt this was a good idea to protect the ancient monuments to be locked and opened only on arrival of tourists. There were a lot of beautiful and intricate stone carvings inside the temple, unfortunately the guide said it is banned to click photos inside, which I felt very bad and also suspect the guide said it in his personal interest and there is no government rule as though it was not put up in any boarding as “Photography is prohibited”. Leaving behind this bad experience we continued to enjoy the gorgeous sculptures on the columns and on the door frames. It looked like the heavy circular pillars were made using some kind of lathe. There was also a sculpture on one of the column depicting the 12 sun sign’s (rashi’s), but the guide said that it is not sun sign’s, but I could clearly see the Leo, scorpion and many other sun sign in circular form, which the guide said it is just there coin’s. I felt he was wrong as it was attached to the Surya temple so it is more evident that they were sun sign’s not just some coins.
I could still click the below three pics inside the temple before the guide stopped me from further clicking,
There is a linga, which stands three feet tall in the sanctum. The best part of the temple was outside the temple which was the Door Jamb and lintel moldings, which were of five to nine panels of stone carvings each of them portraying a separate meaning like flowers, weapons, animals, and birds. On the lintel of the doorway is a dedicatory block containing an image of Gaja-Lakshmi with an elephant on either side. In fact, in the Kannada spoken regions, it is common to find the image of Lakshmi in the dedicatory block on the lintel irrespective of the temple's original dedication; whether the principal deity was Shiva, Vishnu or Jaina.
The entrance doorway and the towers are covered with close intricate carving.
The ornamentation on the outer wall of the shrine consists of prominent central niches above which is a miniature tower (sikhara or aedicule) which is purely nagara (north Indian) in style.
Perhaps the most beautiful part of the temple is its south door-frame, it had nine sections of stone carvings.
One more interesting thing about this temple was its miniature shikara's on the main shikara, 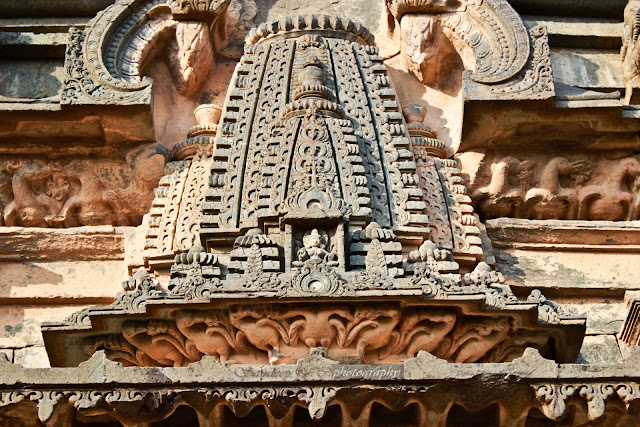 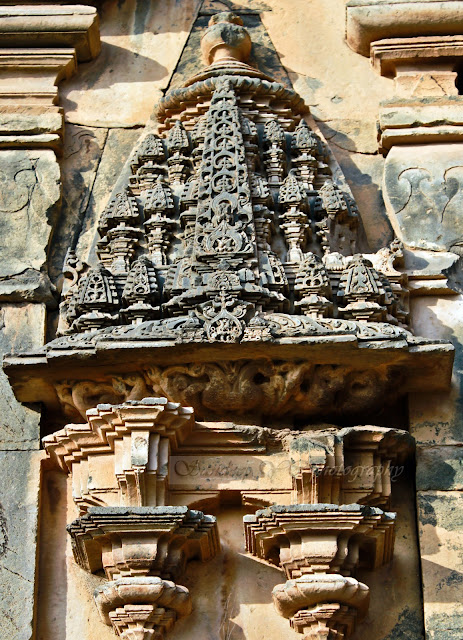 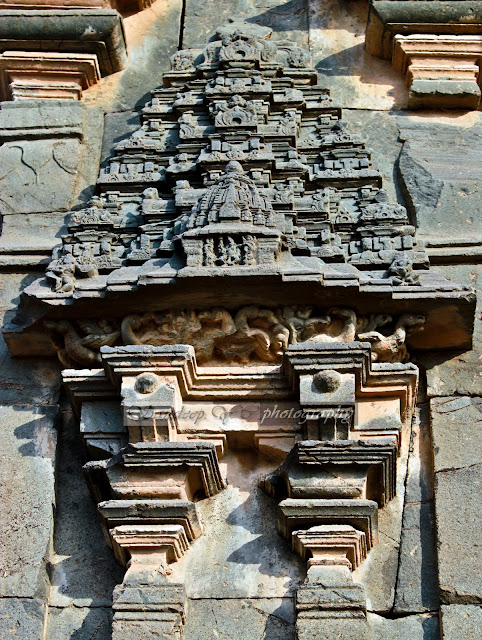 Suryanarayana temple: a small Surya shrine faces the main shrine on the west of Kashivishwanatha temple. There is a common platform between both which must have been an open mandapa originally. Hence the Kashivishwanatha temple has two entrance one on the east side and other on south side of the mandapa. It is dedicated to the sun god Surya hence is called Suryanarayana.
Makara: Makara, a strange animal with elephant trunk, crocodile body and peacock tail is a Hindu mythical animal and the vehicle of gods Ganga and Varuna is depicted in the temple.

Nanneshwara Temple: On the west of the Kashivishwanatha temple is the Nanneshwara temple, is worth a visit. This temple looks like a simple and small replica of the much elaborate Kashivishwanatha Temple. Probably the Nanneshwara Temple was built as a prototype before the grand Kashivishwanatha Temple was executed. The temple stands on a platform of four feet in height. The mukhamandapa has sixteen pillars, each with a square pedestal and circular mouldings above. Based on an inscription found in this temple, it can be dated back to second half of the 12th century A.D.