By 5.45 pm we left the Badami caves & started towards the Museum which was on the opposite side of the caves, it is around 1.5 km for us, but as per Google maps it is around 1km. Though it is only about half a km from the caves but there are no proper roads to reach here, Government has failed a bit here in claiming some land & protecting the road to these places, we had to struggle a lot to make way for our Innova, as the road is so narrow that even if there is another vehicle on the other side one of us must have to reverse the car back to the road, but luckily no other vehicle came in the opposite direction till we reached the fort gate.
Also there are a few temples which reside inside the town with all the houses in the town surrounding the temples which has a history of over 1500yrs. I felt there should be a protected area around the temple at least to protect it from being encroached. Due to the roads being very narrow & very less awareness of the places on the other side of the cave temples, most of the tourists go unnoticed after visiting the cave temples.

One has to go through the town market area to reach the fort gate, once you reach the fort gate there is the Badami archaeological Museum, which was already closed as it was around 6 pm, we further drove till the Mallikarjuna temple & again that was also closed, I wonder why even the compound gates were also locked so didn't get an opportunity to even see the temple walls from close.

Mallikarjuna group of temples: built in 11th century A.D, also called Upper Bhoothanatha Temple, has a stepped superstructure, commonly found in Kalyani Chalukyan constructions. Constructed in Oriya style as compared to the Dravidian style of Lower Bhoothanatha temples. The temples are located on the northeast side of the Agasthya tank. Their typical Late Chalukyan features include plain walls, angled eaves over the mandapa's, and pyramidal towers with deeply carved and closely spaced horizontal courses.

The other noteworthy places to visit in Badami are the Badami Fort and the Archaeological Museum.

Archaeological Museum: The museum is opened to public from 10am to 5pm & is closed on Friday’s. It contains beautiful sculptures from the caves & rock cut temples which are worth seeing. The sculpture gallery is maintained by the Archaeological Survey of India on the Bhoothanatha Temple Road.

We then parked the vehicle & started to walk along the lake side of Agasthya tank to reach the Bhoothanatha temple complex; it was during the sunset & had some breathtaking scenery of the Agasthya Lake & the sky colored after the sun set.

Agasthya Lake: this is a large water body framed at the center of the Badami fort surrounded by the red sandstone hills. To the north of the tank lies the Museum, Shivalaya temples & the Mallikarjuna temple complex, to the south is the four cave temples, to the east is the Lower Bhoothanatha temple complex, and to the west is the Dattatreya temple and the Badami town. Towards the north, west and east sides of the tank are built steps with red sand stones making it look more beautiful.
Bhoothanatha temples were also locked but had the opportunity to walk around the temple walls.

Bhoothanatha Temple Complex (Lower): built between late 7th century & 11th century. The temple platform extends into the east end of the Agasthya tank, in a delightfully picturesque setting. The sanctuary and inner hall are Early Chalukyan; the outer hall overlooking the tank is Late Chalukyan.
Then proceeded behind the temple as there was a walk way leading behind, just was curious to see where it leads to, but none of them followed me, as it was already dark, so thought to go alone and felt I was not mislead after seeing some rock carvings on the route, which made me more curious to continue the way & saw someone calling my name from behind, & it was our team members, they just followed me without my notice as they felt it was dark and unsafe to go to remote places like this.
I finally ended seeing some cave and didn't even felt to enter inside as it was very small and didn't attract me so just took some more snaps of the colored sky above the Agasthya lake in almost dark.
Later just felt to enter the cave to see total darkness & put the torch on from my phone & was surprised to see a sculpture of Vishnu inside the cave, & then felt that the day was ended with an amazement. This cave is behind the Bhoothanatha group of temples it houses a sculpture of Lord Vishnu sleeping on Ananta & attended by Lakshmi.

Some more pics of the sunset with different exposures and locations, 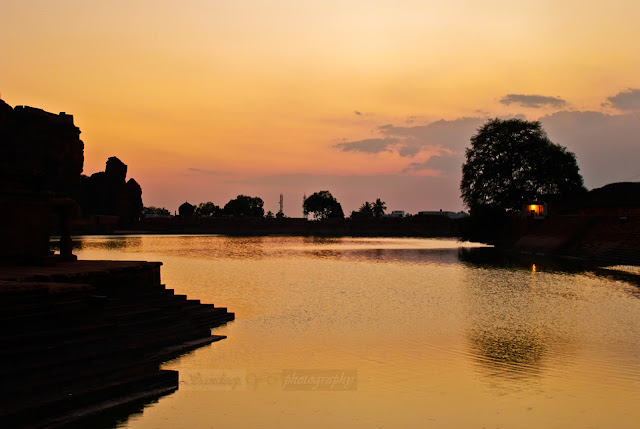 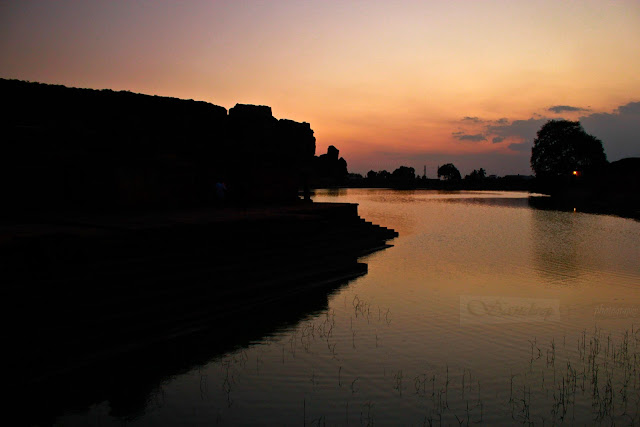 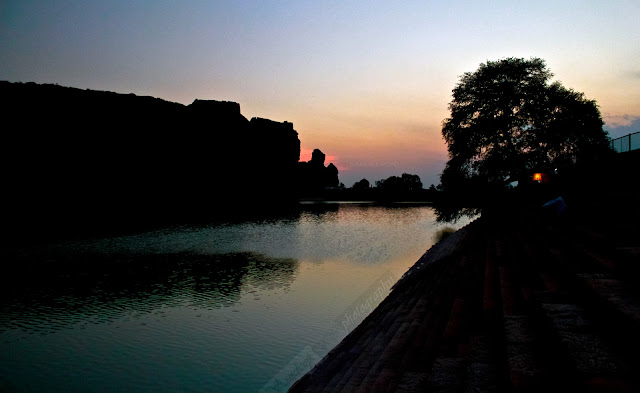 Then started returning back quickly to the parking area, it was dark and no one around in this place, felt a bit unsafe after sunset in these places. It was around 7 pm by the time we left the place & started back to our hotel in Kudala Sangama, on the way we just took some chances on the route shown by the Google maps navigation, as it showed a shorter way to reach the Hotel, but Google didn't disappoint us even though the route was so remote that there were no villages for almost an hour of drive, but we reached our destination without any hassle. It was almost 2 hour drive to cover the 65 km through the village roads. We had our dinner at Kamat, Kudala Sangama & ended our day.

Before I take you to the day 3 - Kudala Sangama travelogue, here are few more temples which we had a glance from far away through my 250 mm lens, reason being we need at least half a day to cover these temples as one has to climb up the hill to visit these places, definitely I'm going to visit them in my next visit.

Malegitti Shivalaya: There are many temples at Badami of which Malegitti Shivalaya is significant from many points of view. Perhaps with the association of a woman who was a garland maker, this temple should have got that name. The very location of this temple is enchanting. It is built on a spur of the rugged hills which overlook the town of Badami. It is important from the evolution of the Chalukyan style of architecture. It represents a stage of Chalukyan art. It is a good example where the domical finial is octagonal & is supported by a series of small shrines. The tower above the garbhagriha is a typical Dravidian Shikhara. This temple is dated to the 7th century A.D. It is perhaps the oldest temple & also the finest in Badami apart from the cave temples.
Yellamma Temple: built in 11th century A.D, This Late Chalukyan temple, located at the west end of the tank, is notable for its tower, whose crimpled and layered roof describes a shape halfway between the curved Shikhara of North India and the pancake pyramids of the south. The sanctuary's outer wall lifts the roof upon a fabric of verticality, achieved by the single-minded division of its projections into a dense forest of tall, slender, closely-spaced, and delicately engaged pilasters