Probably the oldest of the 4 caves, dedicated to Vishnu, is the largest of the series and was excavated, according to its inscription, in Saka 500, i.e. A.D. 578, by Mangalesa. The cave facade is divided by six squared-off columns, beneath which is a frieze of dwarves. The dwarves are presented in small groupings, unlike the continuous frieze on Cave 1.

Vishnu: The eight-armed deity wears a tall crown, and carries numerous weapons (including bow, middle left arm, and arrow, middle right arm) in addition to his usual shell (upper left arm) and chakra (upper right arm). His lower right arm holds the hilt of a sword, which is broken in the middle. The upper part of the blade extends past the right side of his face.
The god's martial aspect is appropriate to the royal dedication of this cave.

Harihara: unlike in the cave 1, here, the details are somewhat clearer, in spite of the wear and tear of the rock on which the figure has been carved. The differences on the Shiva and Vishnu sides are more apparent here.

Vishnu Seated on Sesha: This sculpture, from the left end of the portico, presents Vishnu seated in lalitasana (the posture of "royal ease") on the Cosmic Snake, Shesha, with attendant figures including Garuda (Bottom left). The execution of the work is very fine, although the god's face is rather worn.

Narasimha: Avatar of Vishnu, 4th of the 10 primary avatars. Vishnu's lion incarnation is posed with attendant figures. His lower left forearm rests on a club whose bottom part has broken off.

Trivikrama:  The iconographic features of this Trivikrama are similar to the sculpture of the same subject in Cave 2: the demon king is shown clinging to one of Vishnu's legs, upside down beneath the other leg, and bottom right with his court. The dwarf and most of his umbrella, however, have been lost.

Bracket Couple: Cave 3 is noted for its finely decorated brackets. The theme is auspicious fertility, with a
divine couple and female dwarf attendant in a floral setting. The pair may represent a Yaksha couple. 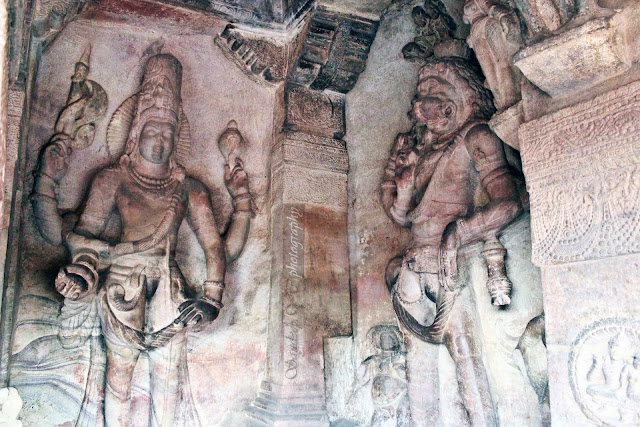 The Jaina cave-temple at the very top of the hill is later by about a century from the rest, dedicated to the Lord Mahavira
Relief of Tirthankaras: The undifferentiated Jain saviors in this relief were, according to the Blue Guide, carved later than the major images in the temple.

We were in a hurry and couldn't see the cave 4 in detail as it was already 5.30 pm & just spent few more mins taking some snaps of the lovely landscapes from the caves also can have a full sight of the other temples around the Agasthya Lake from these caves. Didn't waste any more time started descending back to the parking lot, although took some more beautiful snaps of the landscapes around. Our next destination was Bhoothanatha group of temples which I’ll be covering in the next post.