We then went to Lokeshwar/Virupaksha Temple which is the most magnificent temple of the Chalukyan style built by Lokamahadevi, the Queen of Vikramaditya II in 740 A.D. in commemoration of his victory over the Pallavas of Kanchi. The architects of Pallava country built this temple; Anivarita Gunda was the chief architect. In fact this temple is believed to have been a model for the Kailasa temple at Ellora.
The temple is quite big with an area of 224ft & 105ft in length & breadth respectively. The temple consists of a garbhagriha, pradakshinapatha, mahamandapa, mukhamandapa & separate Nandi mandapa in front of the temple. The garbhagriha has a Dravidian type Shikhara of three tiers. The square garbhagriha has a highly polished Sivalinga on a square panipitha.

The most important part of the temple is the 18 pillars in 4 rows at the spacious mukhamandapa. They contain fine sculptures of Ramayana, Mahabharata & Bhagavata purana. There are also pictures depicting the Illusions. Poses of couples on pillars & the Series of amorous couples in various intimate poses.
At the main entrance of the Virupaksha temple from the eastern porch, the inner ceiling with huge image of Surya, the god of the sun, is driven in his chariot across the heavens in this panel from the ceiling of the temple. This rather symmetric composition includes a radiant crown for the god; makaras disgorging smaller figures at his shoulders; Aruna ("Dawn"), his legless charioteer, at the bottom of the panel, holding the reins of seven horses representing the days of the week; a plethora of other divinities; & scalloped clouds (the usual convention) on either side. The archers standing by Surya's legs personify the light of Dawn, whose arrow-like rays dispell the darkness at the break of day.
This temple is considered as one of the most important for Hindu scholars & Ancient Indian history. Also found here are the halegannada (Old Kannada) inscriptions
You can spend some meaningful time trying to unlock the stories of the sculptures on the pillars, each of the 18 pillars here have a different story to tell. 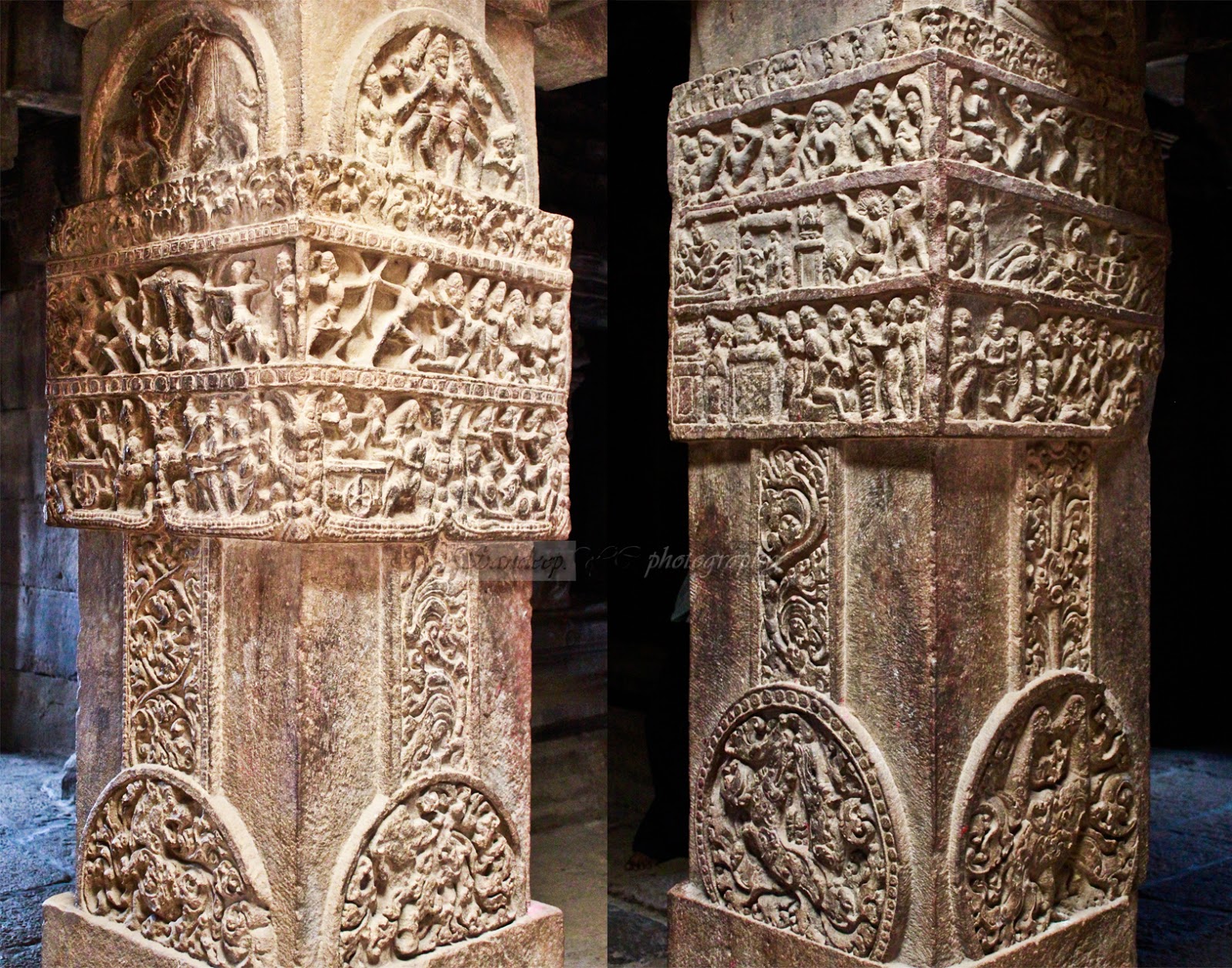 There are Guardian on both sides of the entrance, this nonchalant guardian's oversize club, as a martial art & form of exercise(shown left in the below pic). As an attribute, the club can belong to Shiva or Vishnu. Since the guardian holds aloft a snake in his right rear hand, his affiliation is undoubtedly to Shiva. Here is another guardian, with a different kind of club, in a somewhat relaxed if not quite so casual pose as his brother in the previous photo(shown right in the below pic).

Also found here is Vishnu Trivikrama takes an acrobatic step across the universe. The temple, although dedicated to Shiva, also includes Vaishnava images such as this one. Harihara, with a trident-bearing gana on his right & Lakshmi(?) on his left. His left upper hand holds a conch. His right upper hand holds a worn attribute which looks suspiciously like a chakra, although this would not be correct for the "Shiva half" of Harihara. Shiva Ardhanarishvara is half-man & half-woman, here accompanied by a gana who seems astonished by the transformation. Also found are the sculptures of Narasimha, Durga Mahishasuramardini , Ravana lifting kailasa, Shankha Nidhi & Padmanidhi.
Scene from the Mahabharata: Detailed scenes from the epics (Mahabharata & Ramayana) are carved on the pillars. The central band here may depict Bhishma lying on the bed of arrows (from the Mahabharata). During the fight his body was pierced with so many arrows that they supported him above the ground when he fell. 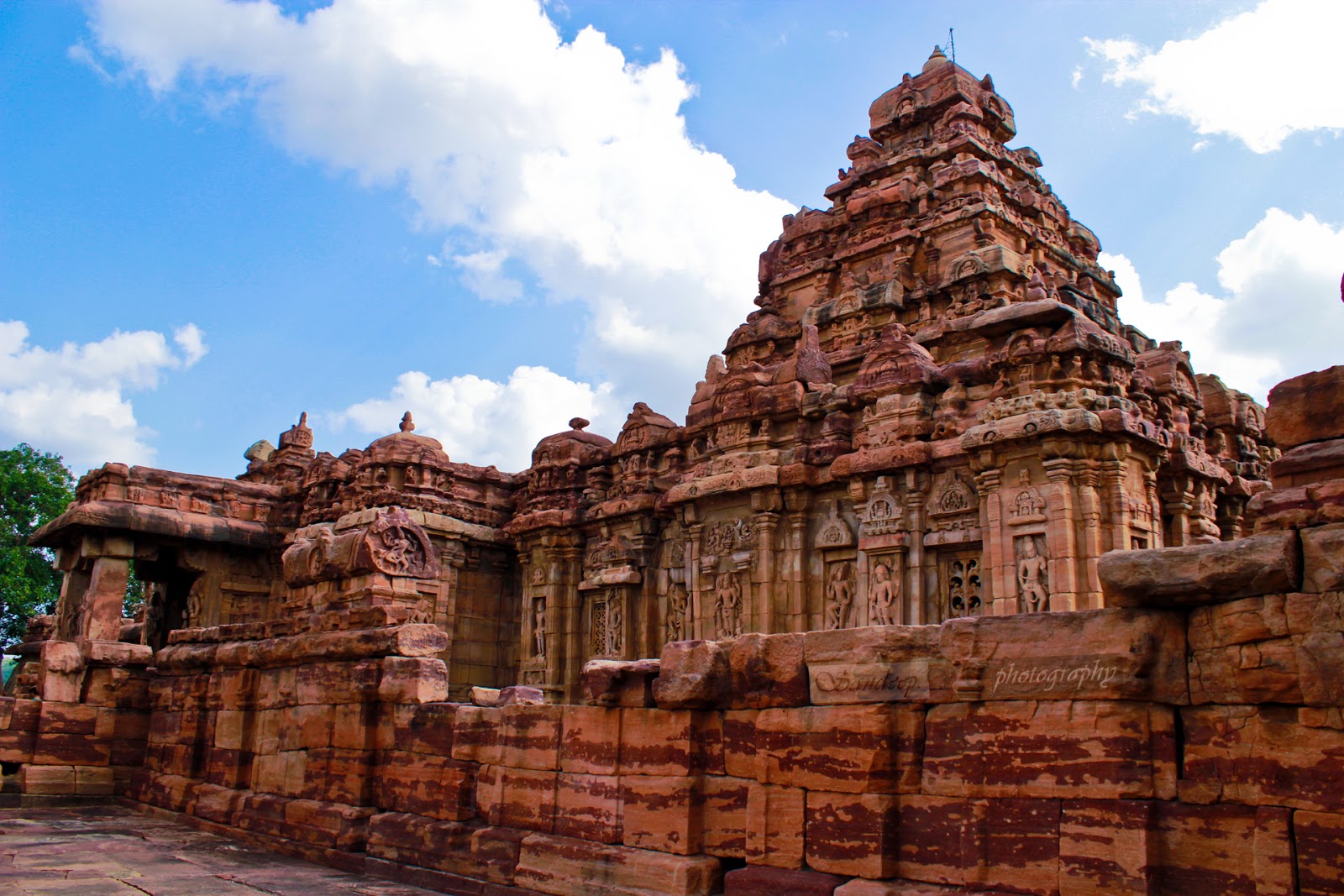 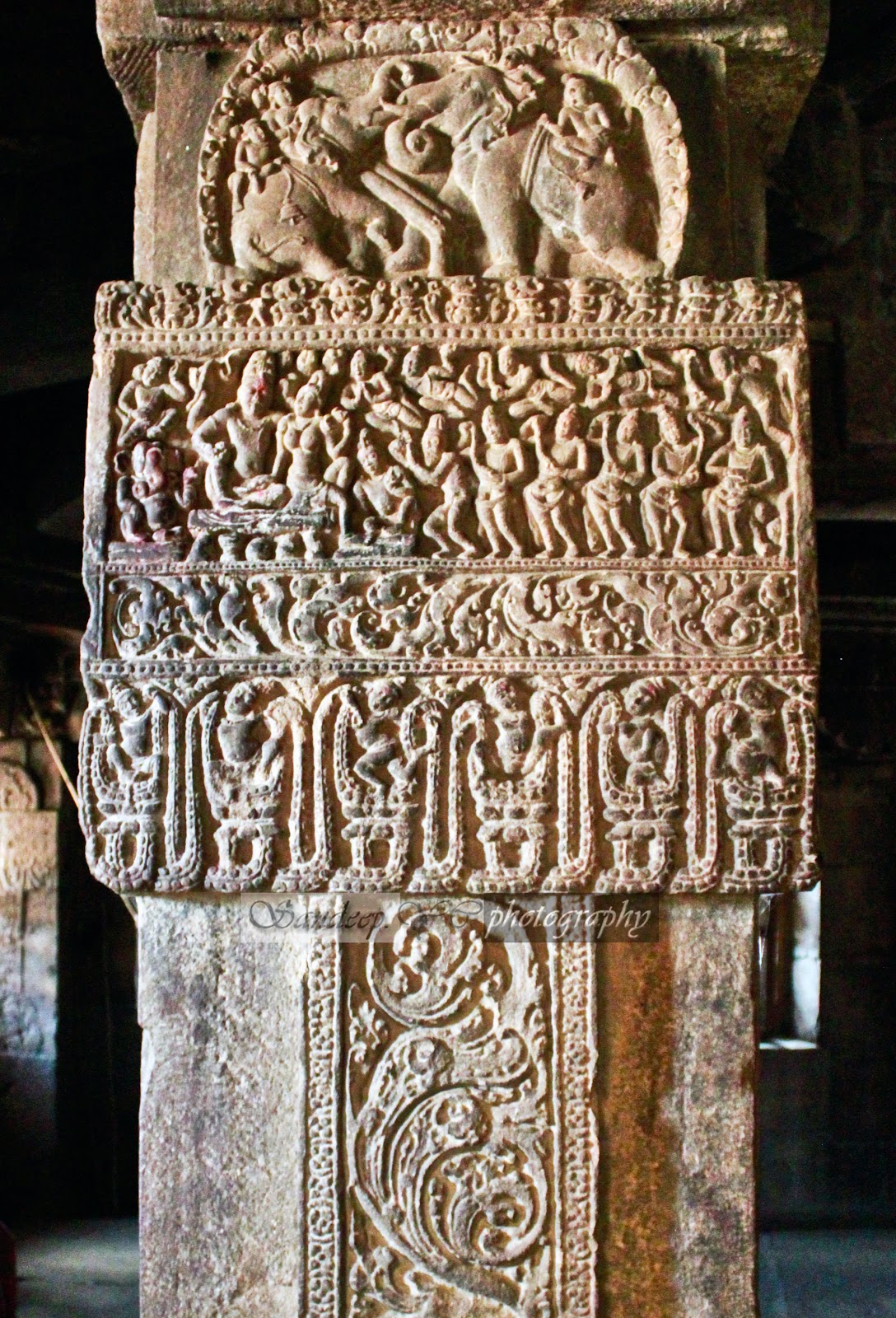 There is a Nandi mandapa in front of the Virupaksha temple, which has a fine large stone bull which face the temple. The pillars here shows some sort of ornamental structures on it making it look more beautiful. 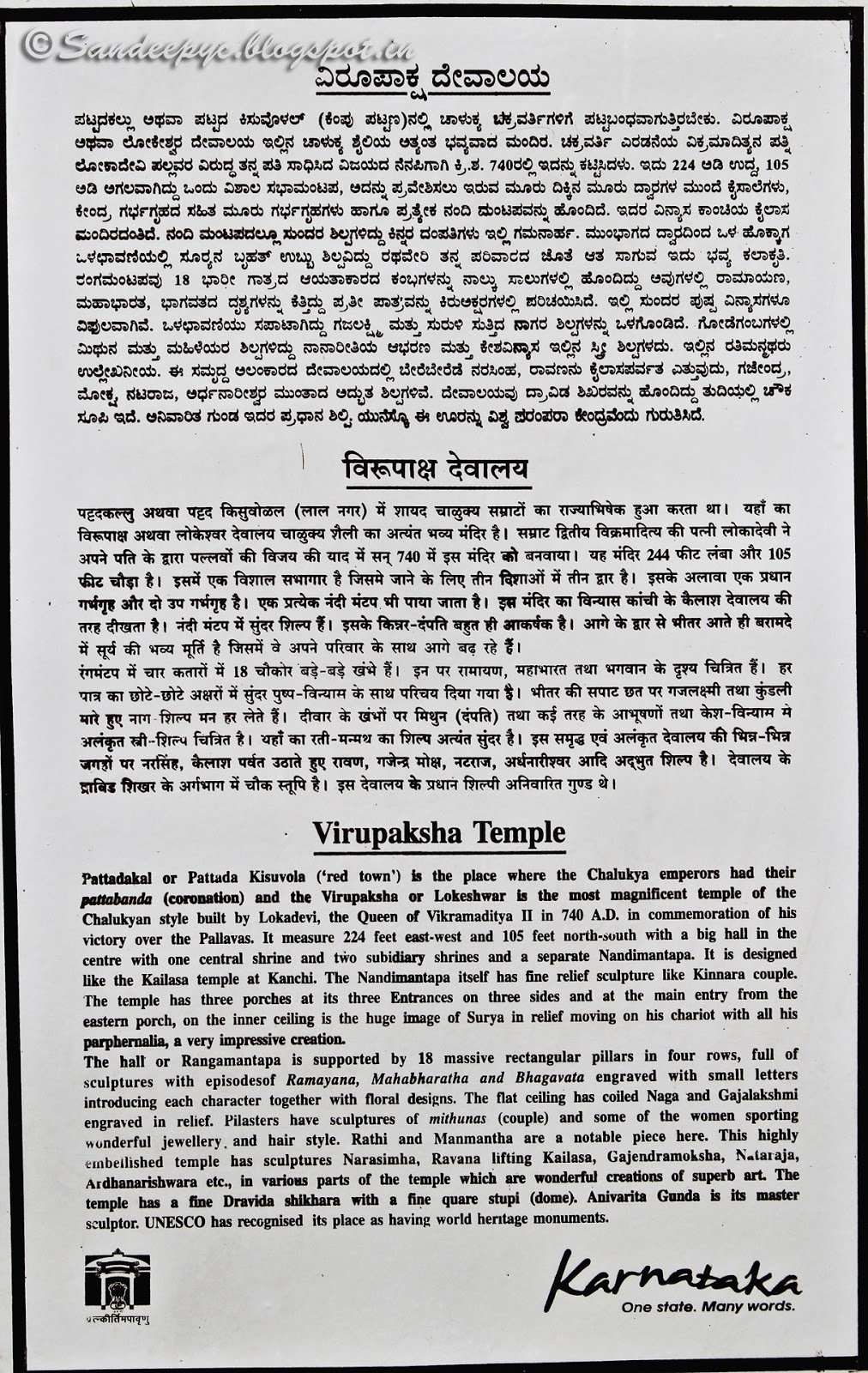