Some facts about Pattadakal: Actually Pattadakal represents the final or culminating stage of the early Chalukyan style of architecture. It is believed that the experiments made in Aihole was later implemented in a more professional manner in Pattadakal & hence it has more matured & finished monuments compared to Aihole group of temples. Both Dravida & Nagara type of temples were built at Pattadakal during the reign of the early Chalukyan kings. Sangamesvara, Virupaksha, Mallikarjuna & Jaina temples belong to the Dravidian style, whereas Galaganatha, Papanatha, Kasi Visvesvara, Kadasiddesvara & Jambulinga temples belong to Nagara style. The temple building activity started from the early 7th Century & continued up to the middle of the 9th century A.D. Thus 300years saw a glorious epoch in the evolution of temple architecture in Pattadakal. There were master architects like Revadi Ovajja, Anivarita Gunda, supported by sculptors like Changamma, Pullappan & Beladeva.

Back to the travelogue, it was almost 1pm by the time we reached Pattadakal temple complex which is just 13km from Aihole. Unlike Aihole, the temples here are not scattered at different, so it will be easier to locate the temples all at one campus. There is a nominal entrance fee for the maintenance. As you enter the temple complex you find all the temples at a glance right from the entrance. Also this is the most visited & most beautiful among the Chalukyan temples. 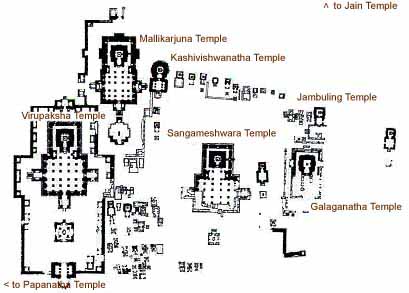 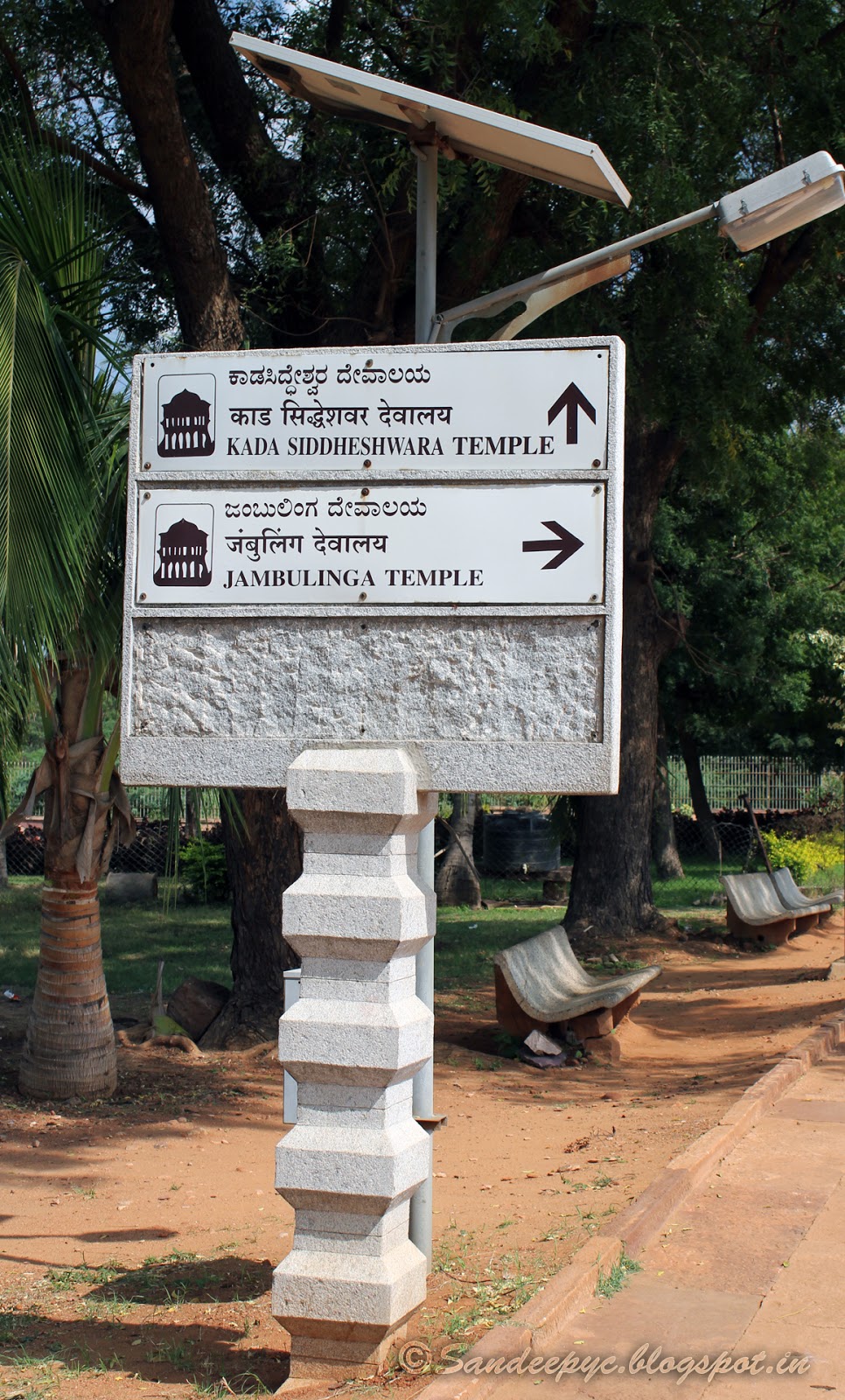 We opted for a guide here also, & he first took us for the Galaganatha temple built in 700-750 A.D., even from a distance it attracts our attention because of the presence of the prominent northern type Shikhara. It is described as belonging to Rekha-Nagara type, also found in Bhubanesvar in Orissa. The entire Shikhara is highly proportioned & this is the unique feature of this temple. The garbhagriha has a polished black-stone linga of the 12th century. 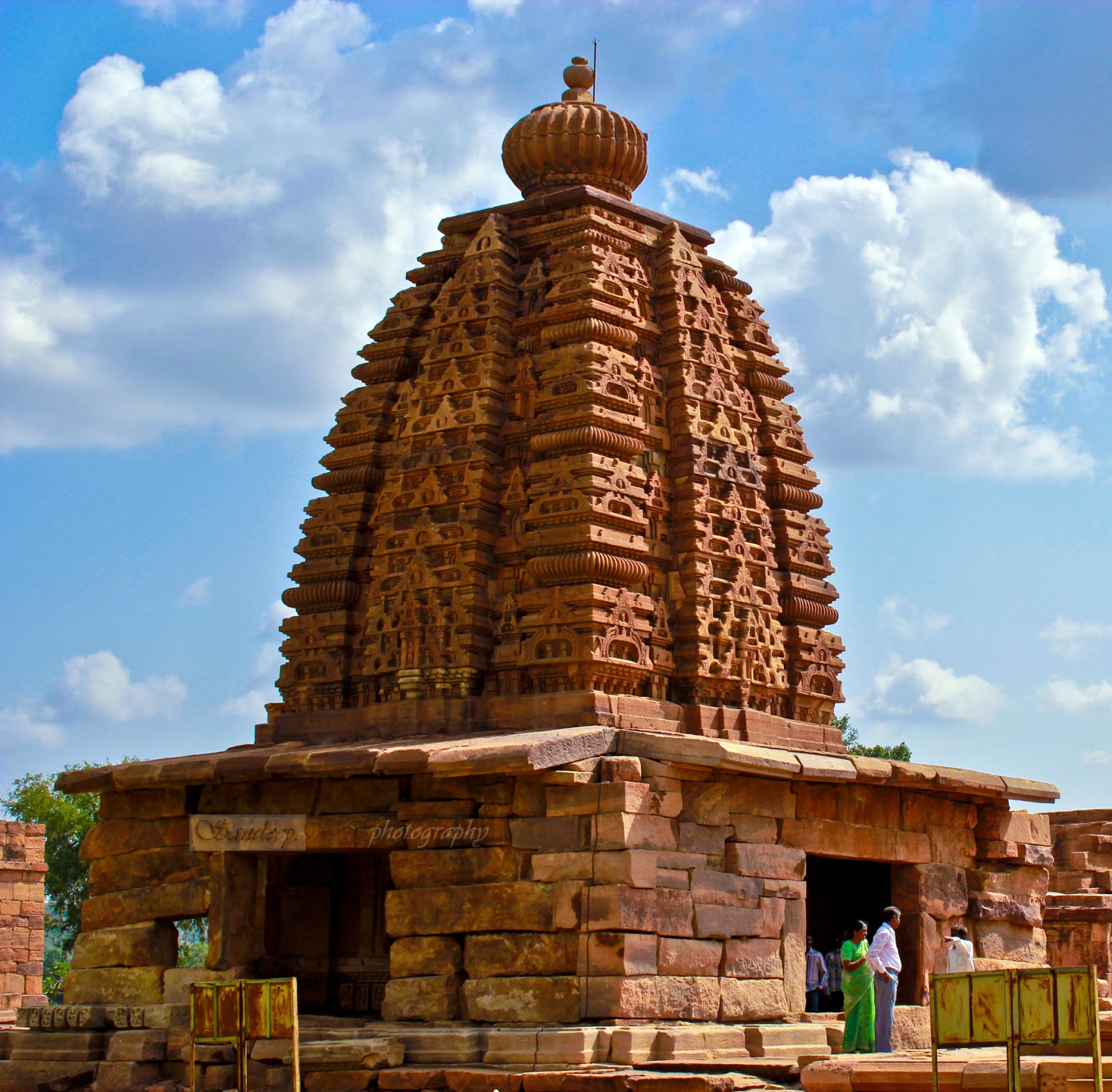 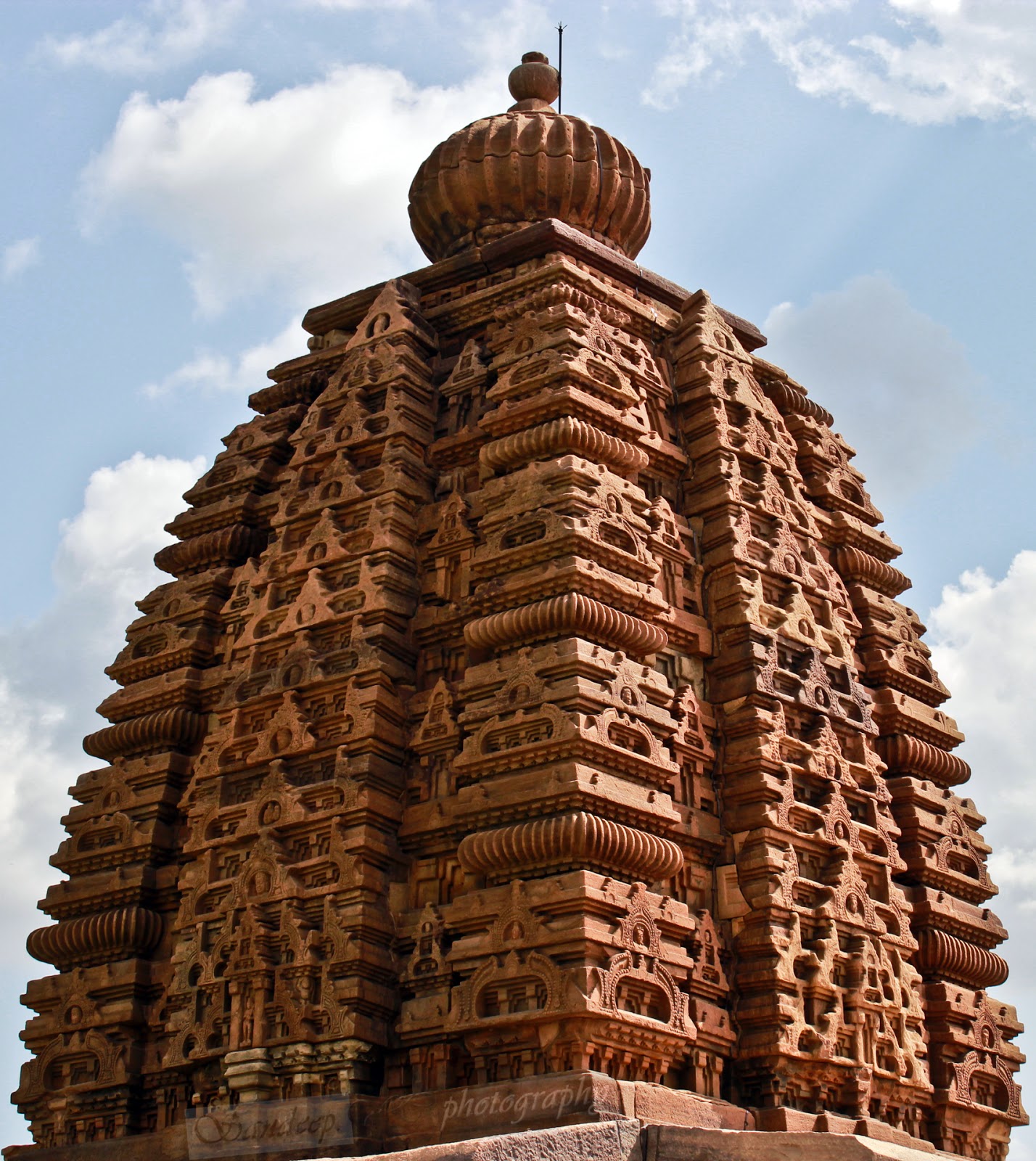 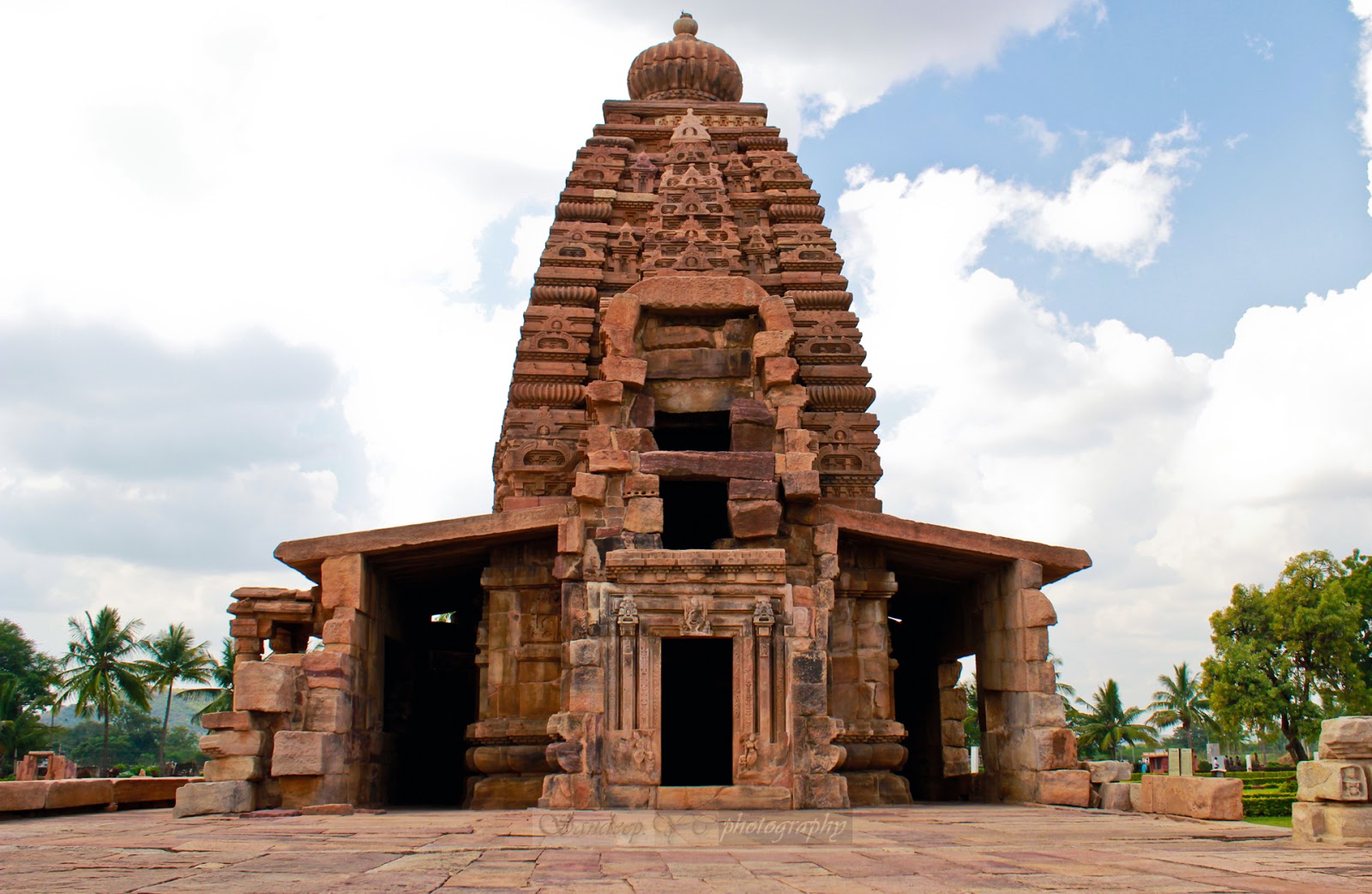 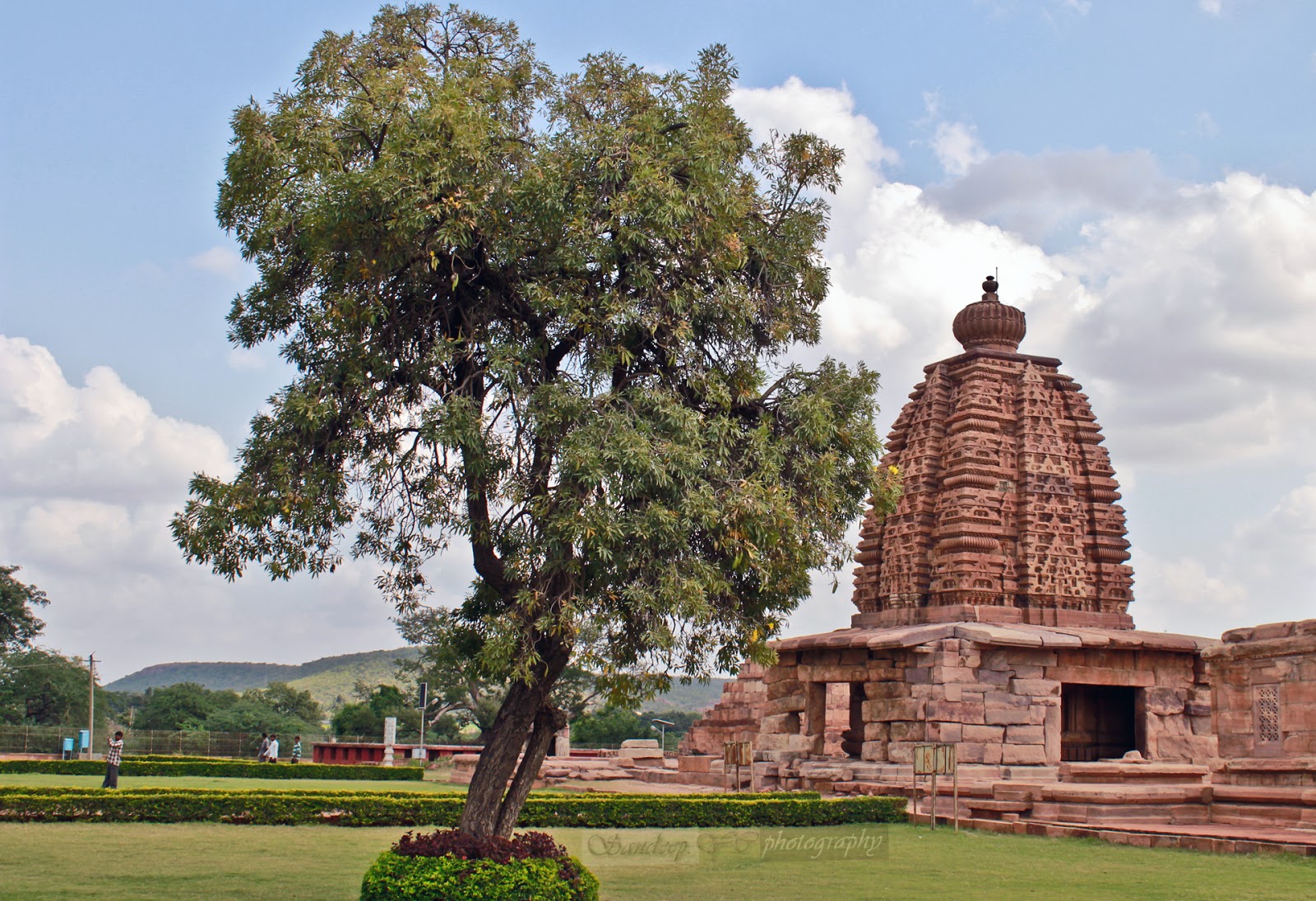 Subsequent to this was the Jambulinga temple, Built probably in the middle of the 7th century A.D. The superstructure over the sanctum is of the rekha-nagara (northern) style. This was just looking like a miniature of the Galaganatha temple next to it.
Further we moved towards the Sangameshwara temple, which is Dravidian type temple built by Chalukyan king Vijayaditya (693-733 A.D) & he established Vijayesvara Siva linga in it. Southern parts of the mandapa have fallen down. Efforts have been taken to preserve & maintain the remaining part of the temple. 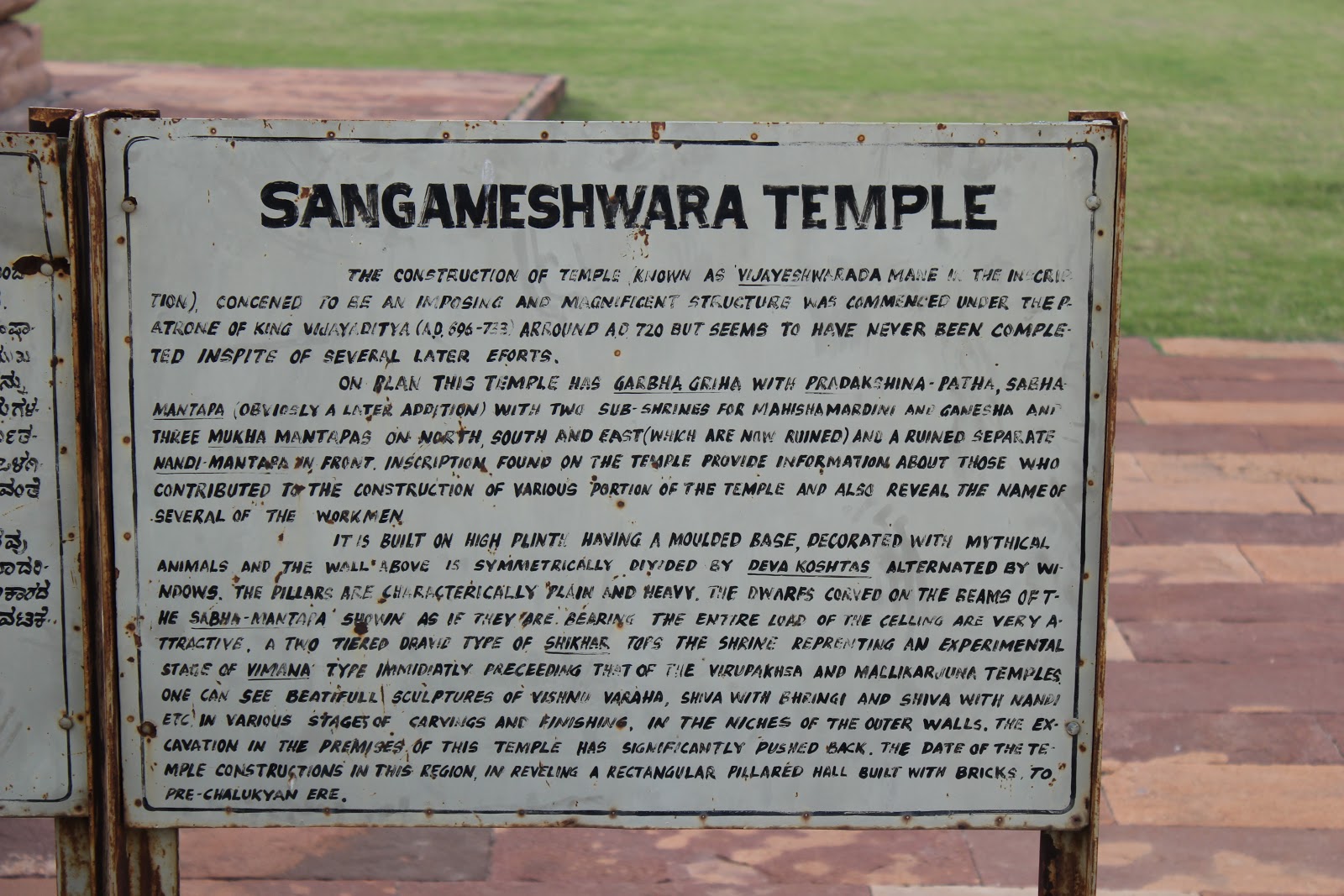 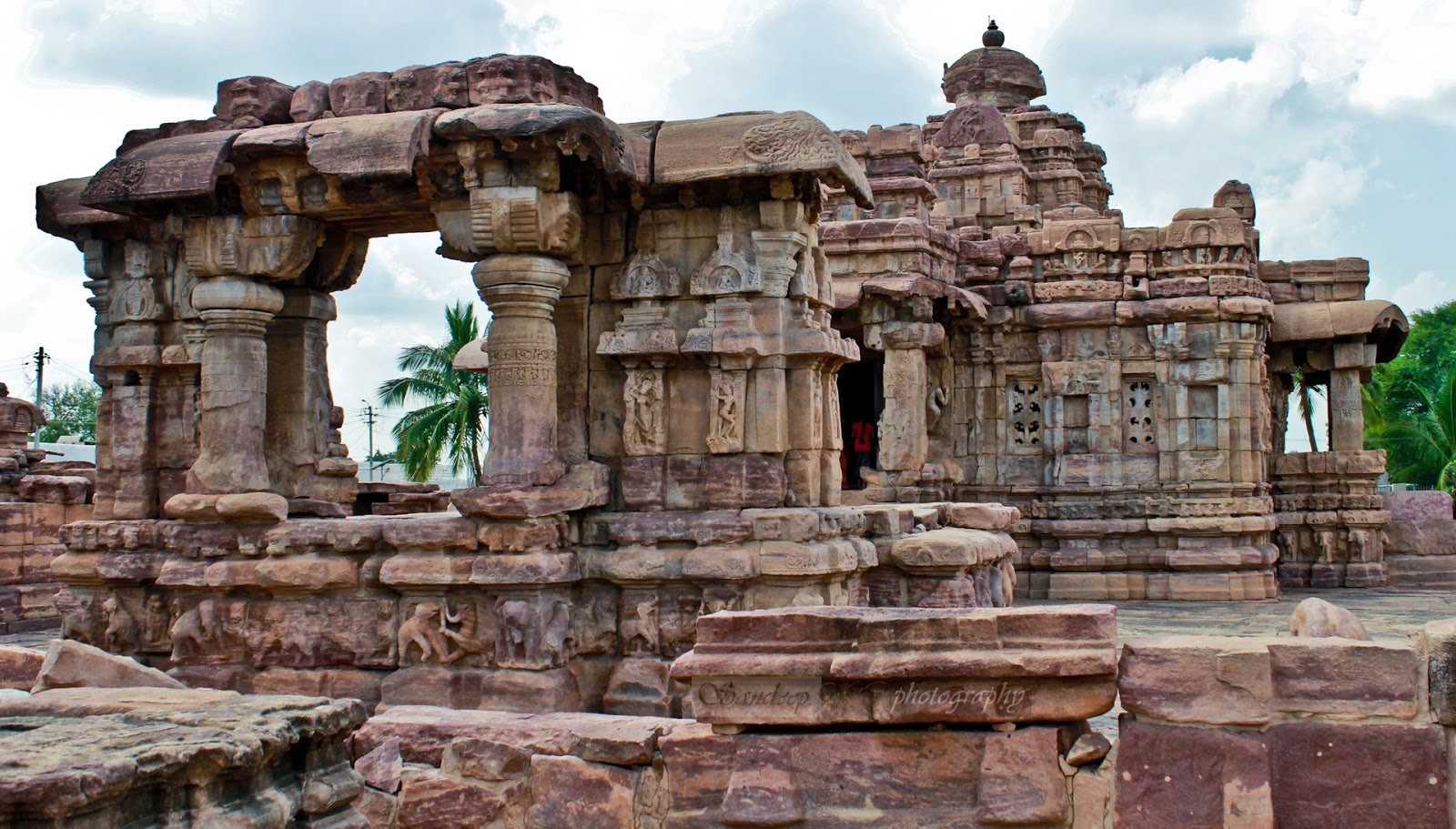 The epic & puranic episodes carved on the pillars of the sabha-mandapa include goddesses fighting Mahisasura, churning of the ocean (samudra-manthana), Narasimha fighting Hiranyakasipu “exploits of Krishna” slaying of Maricha etc., . The amorous couples relieved on the engaged columns here are slightly bigger in size & better preserved than those in the Virupaksha temple. 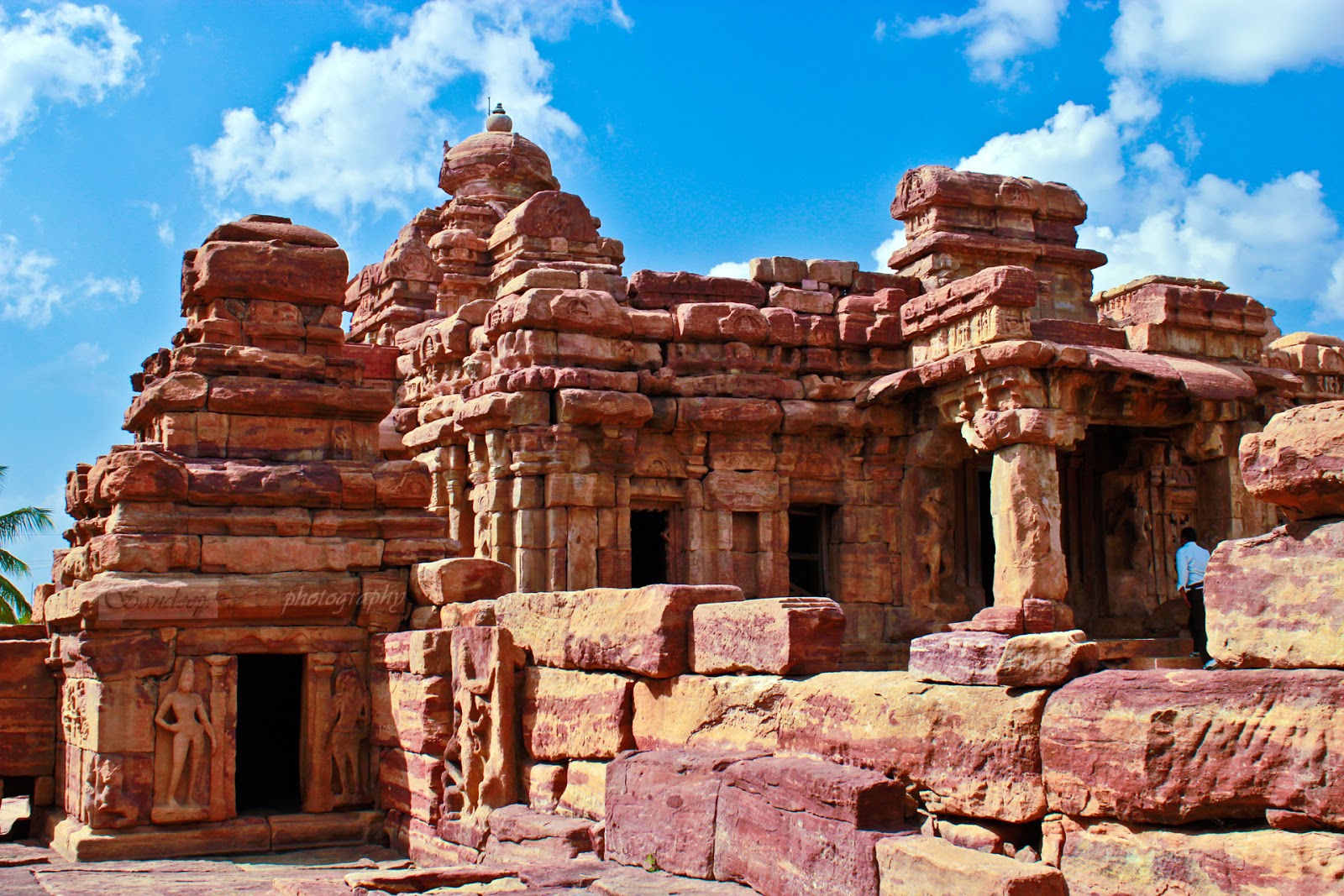 The Samudra Manthan: Scene from Hindu mythology depicting the Churning of the Primordial Ocean of Milk in order to obtain Amrita or Amrit, the nectar of immortality
One more important sculptures found on the pillars are the tales of Panchatantra, “The mongoose & the farmer’s wife” & “The monkey & the crocodile”; here the first one teaches “Don’t act in haste. Think & act” & the later’s moral says that “At times, presence of mind pays well” 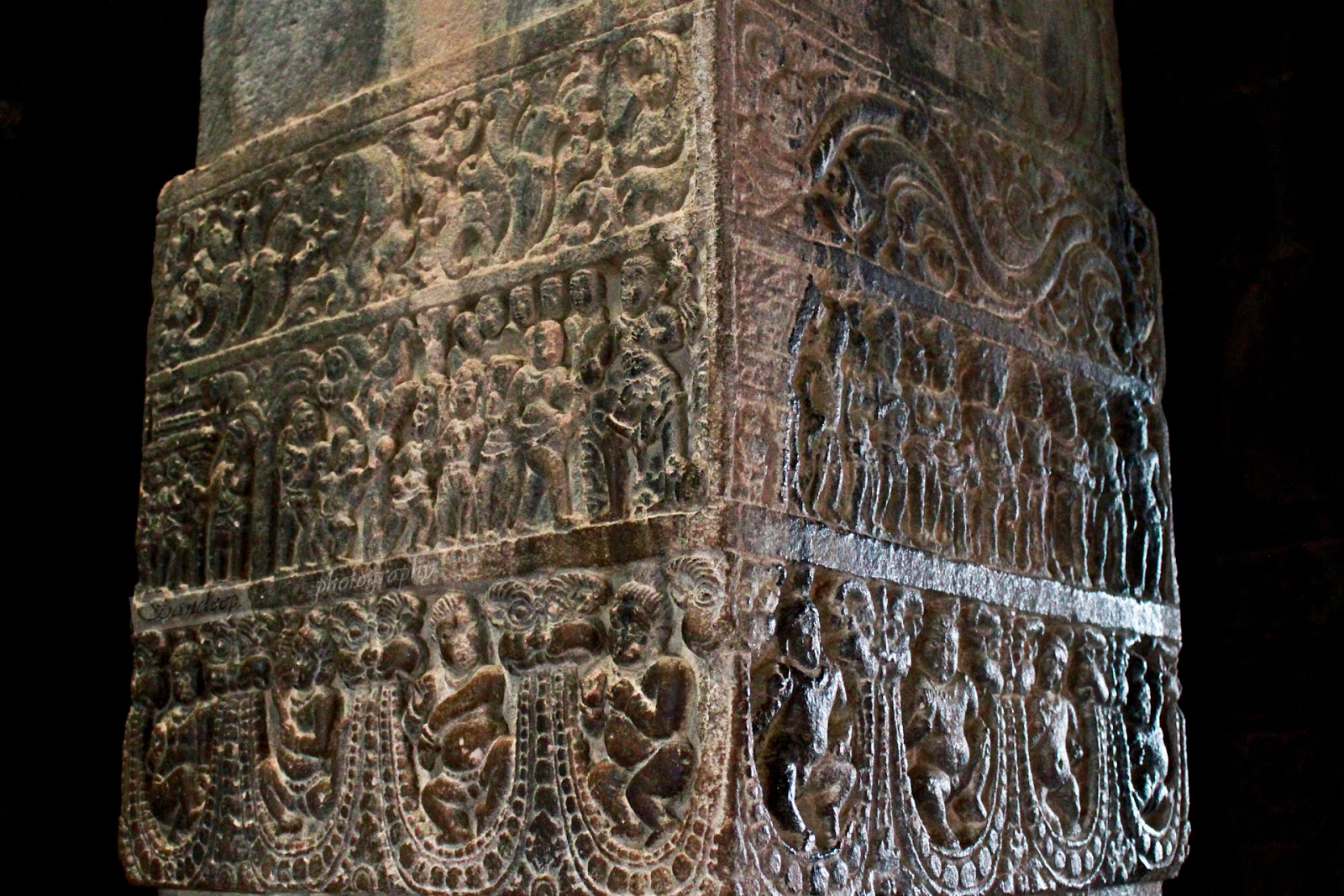 For a detailed explanation on the Panchatantra tales follow this link http://www.bharatadesam.com/literature/panchatantra_stories/tales_of_panchatantra.php

Just beside Mallikarjuna temple is the Kashivishwanatha temple, built in the middle of the 8th century A.D, probably the last to be built in the Early Chalukyan style at Pattadakal. It contains on plan a garbhagriha housing a linga & a Nandi-mandapa opposite to it.
The superstructure displays the fully evolved rekha-nagara (Northern) Sikhara rising in five stages with its amalaka & kalasa missing. A mesh-like design covers its surface completely. The well-developed sukanasa projection has a fine sculpture of dancing Uma-Maheswara within the Chaitya-arch. 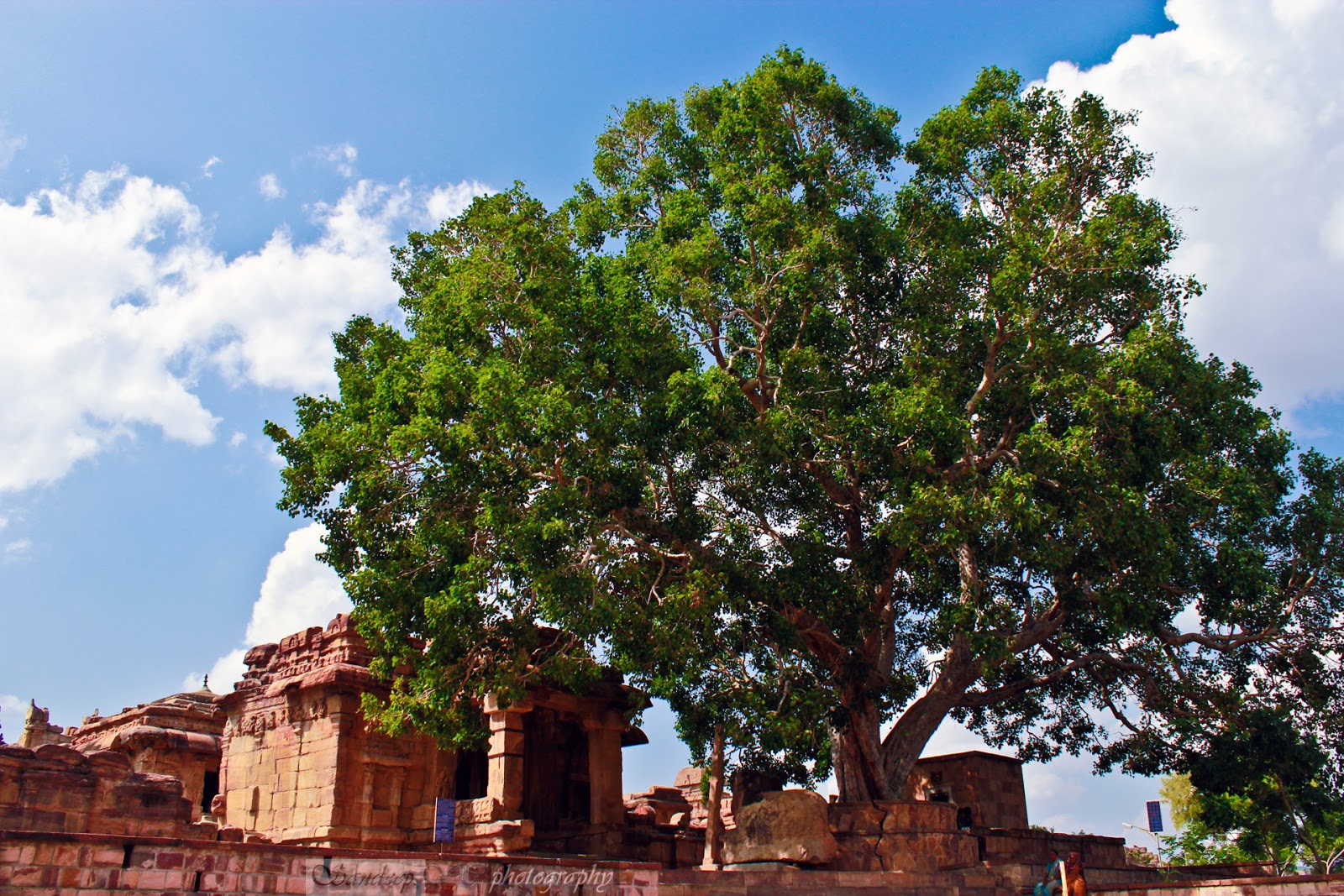 Next was the most important temple of Chalukyan architecture, The Virupaksha Temple, which I will be posting it separately... to be continued…