Keshava Temple of Somanathapura/Somnathpur (ಸೋಮನಾಥಪುರ): This temple is a perfect example of the Hoysala style of architecture built in 1268 A.D. It has three sanctums on the west, south and north to Keshava, Venugopala & Janardhana, all connected. It is an ornately carved temple of magnificent craftsmanship depicting Vishnu, Lakshmi, Saraswati, Ganesha, Rati-Manmatha & Mahishasura. The ceilings and door jambs leading to the sanctum sanctorium are exquisitely carved. The temple is in the care of the Archeological Survey of India as a protected heritage site
Somanathapura is just 50km away from the Shivanasamudra waterfalls so both can be covered in a single day from Bangalore. Nearest city is Mysore just 35km away.
Keshava temple has one of the best preserved stone carvings of ancient architecture of India, in a very good condition.

Stone carvings on the wall of The Keshava Temple 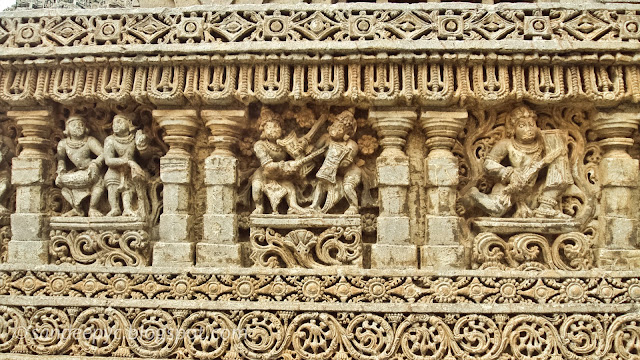 Basement Frieze Animated riders top a band of elephants that rests upon the temple platform. Elephants are often found on the lowest course of the walls, as here, where they are considered to symbolically support the temple on their backs.In another section of frieze, horsemen wielding swords and spears trample fallen warriors underfoot. Below, a convoy of elephants carries baskets and fruits. Almost every person and animal in this frieze, including the fallen warriors, is given an individualized attribute or posture.
On the left, dancing Ganesh; on the right, Vishnu seated "at ease" on Ananta. Between the panels is a female drummer
Indra, the king of the gods, rides with his consort Shachi on the royal elephant. Among his attributes is a vajra (thunderbolt) held aloft in his right hand. The elephant is probably caparisoned like the real elephants of the time; its tusks are filed, as was often done to prevent injury to the animals' riders and keepers.
Stone carved pillars inside the temple; each of them has distinctive design
The entire fabric of the temple is covered with sculptures; hardly a square inch of space has escaped the carver's hand. The main panels, which are elaborately-worked Vaishnava images, rest at shoulder height atop a banded frieze of processional figures and scenes from the Ramayana; above, a second band of sculptures underlies the richly carved sanctuary roof. 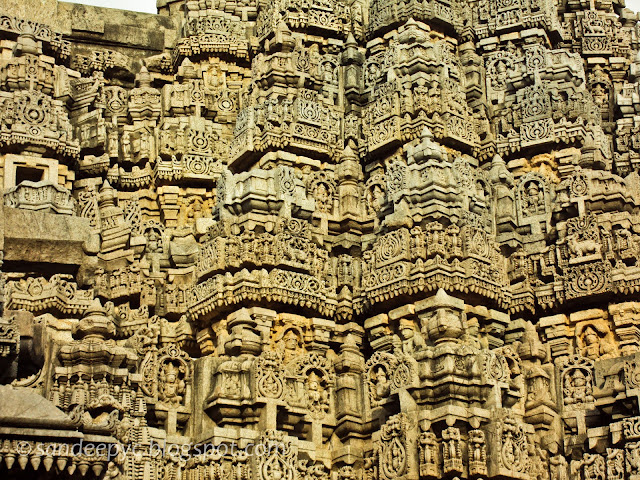 Corbeled Dome of Keshava Temple.
It was so dark inside the temple that only a flash light can make the roof visible.
Statues of Lord Keshava, Lord Krishna and Lord Vishnu
Garuda - Vishnu's mount lacks obvious bird-like features in this sculpture. With his legs in flying posture, he supports Vishnu and Lakshmi on a spray of lotus.
Krishna Playing the Flute - Krishna, surrounded by attendants, plays the flute beneath a tree. His dress and crown are richly ornamented. The typically rococo (ornate and intricate) manner of such sculptures makes the Hoysala one of the easiest styles to recognize in Indian art.