Travelogue: Saturday morning we started our day with breakfast at Kamat Upachar at Kudala Sangama expecting lesser crowd at the temples as it was not Sunday. The road condition which passes by all these places are not great but merely manageable, as it passes by a number of villages the roads have been in very bad condition in most of the places, considering it as a UNESCO world heritage site since 1987 I was expecting a lot of developments in these areas for promoting tourism but I was pretty disappointed. 1500 year old Indian culture should be preserved well & developed properly, but I see the roads which leads to these temples are narrow & in bad condition & most importantly many of the temples are all surrounded by village houses & has been kept in dirty condition & many of them are sharing their house walls with these ancient temples, especially one example is the Papanatha temple in Pattadakal where the access road has been made as open drainage with sewage water from the village is kept to flow on the road towards the Mallaprabha river which is opposite to the temple. One good thing about the maintenance from the government inside the temple premises is very neat & clean.

Some facts about Aihole: Aihole has historical significance & is called as cradle of Indian architecture. Aihoḷe has the potential to be included as a UNESCO World heritage site. The village has 125 temples & is said to be a laboratory of experiments in rock cut architecture. Aihole was the first capital of the early Chalukyas. Aihole dates back to the 6th century. There are many inscriptions found in Aihole describing the Chalukyan periods written in Kannada, one of which is the Meguti Temple, well preserved dating back to 634 A.D.


Coming back to the travelogue we reached Aihole through amingad which is very famous for the local sweet Karadant.
We started to explore Aihole from Huchchimalli Gudi temple, built in the 7th century shows an evolution in the temple plan. There is also a Steep Tank in front of the temple. I won't tell much about these temples here, look out for the images at the bottom which were put up at the temple premises from the Archeological survey of India (ASI) for more information about these temples.
Next on the way was Ravana Phadi or Ravalaphadi Cave Temple. The entire structure is carved out of a huge rocky outcrop of sand-stone. It is about 30ft in length with a depth of 20ft & a height of about 10ft. At the entrance is Sankhanidhi & Padmanidhi in human form on either side. The interior has a tall dancing Shiva in his ten-handed form, dances beside Ganesha & Parvati, equally tall Saptamatrikas observing Shiva's dance(Shown in the photo below). This is assigned to the 6th Century A.D dedicated to Shiva. The roof has also been carved to form beautiful design which you find even in modern palaces.
We then moved towards Meguti temple, there is no road for this temple which is on top of a small hill surrounded by the village, we managed to go a little bit & finally realized that our Innova is not going to make up & we had to come back with a disappointment that there was no road for such an important temple which had inscriptions made during 634 A.D. There is also Mallikarjuna Temple complex & Jyotirlinga Temple Group at this place which we couldn't cover as we had Pattadakal & Badami left for the day.

The first temple was the Durga Gudi temple, which is the largest & perhaps most beautiful temple at Aihole. This name might be due to the word durga meaning fort. The temple was built in 7th century A.D. It also resembles the Parliament of India. There are a lot of sculptures which are of importance here; most popular among them are Harihara, Durga, Varaha, Vishnu with Garuda, Narasimha & Shiva with Nandi.
There is a small tank next to the temple which is well maintained & filled with water.
There was one smaller temple near the Durga temple which had nicely carved pillars inside.
Next was the Suryanarayana Gudi Temple, assigned to the 7th or 8th century, which is famous for the Surya deva (Sun God) statue which is around 0.6m tall, which is also very rare.
Further on the way is the Lad Khan temple dating back to 7th century A.D, which is the 2nd most popular in this complex after Durga gudi. It is called lad Khan temple because a man by name Lad Khan lived in the temple & hence people began to call it so. This must have been a Shiva temple originally. Two distinctive features makes it more popular one is Instead of the usual tower, a rooftop shrine (the structure on top of the roof) is positioned over the center of the mandapa, & the other being the temple's sloping two-tiered roof, which imitates wood construction, is furnished with stone "logs" that cover the joints between the roofing slabs. Also found in this temple is the Emblem of the Chalukyas (shown in the photo below) which include a boar, a curled-up lotus stem (behind the boar), a solar disk above, & a circular object (mirror?) on a stand to the right. There are also windows carved from stones of different patterns found in the temple.
Next to Lad khan is the Gaudaragudi temple. Not known why it is being named as Gaudara gudi (Gauda meaning village head), this must be the Bhagavati/Lakshmi temple, according to the ASI this temple appears to be the oldest among the present Aihole temples, of the 5th century A.D. Sixteen square shaped pillars with abacus hold the roof. The roof is in two tiers one above the other & is made of sloping stones.
Last one in the lane is the Chakra Gudi temple assigned to the 9th Century, known for its 20 sculptures of amorous couple engraved on the doorframe of the sanctum which has Garuda holding two snakes on the lintel. The temple has well preserved Nagarashikhara on the Garbhagriha, & the prominent round Amalaka at the Stupi which may have brought the name Chakragudi.
There is also a Chakragudi well in-between Chakragudi temple & Lad khan temple.
We had opted for a guide at Aihole & paid 200Rs for our group, it was noon & the sun was heating up the open spaces around the temple complex, so we had tender coconut & started our journey to the most popular Chalukyan temples, Pattadakal & the 2nd UNESCO world heritage site in Karnataka after Hampi. You can also get a tourist guide book & photos of the important monument’s here.

Photos of the information boards put-up in-front of each of these temples by the Archaeological Survey of India, 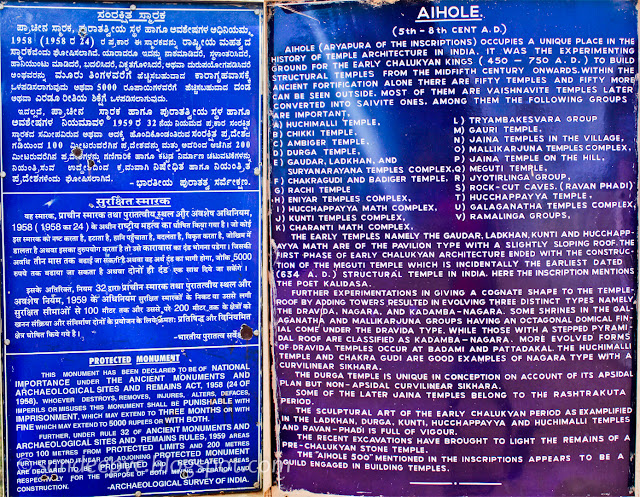 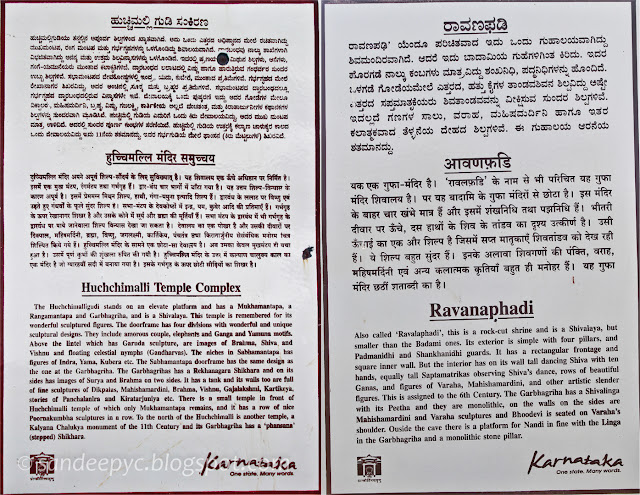 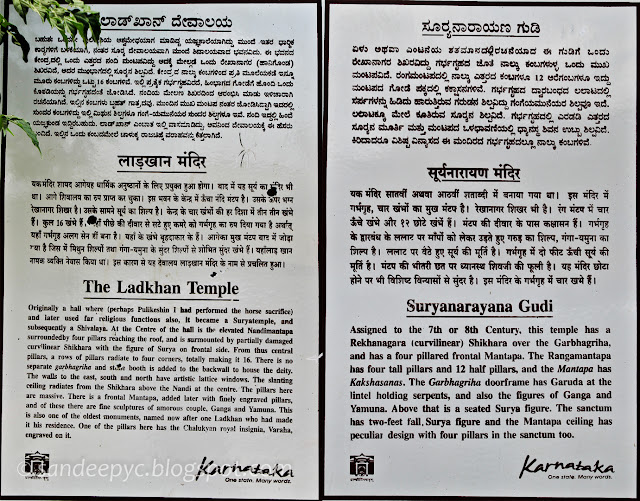 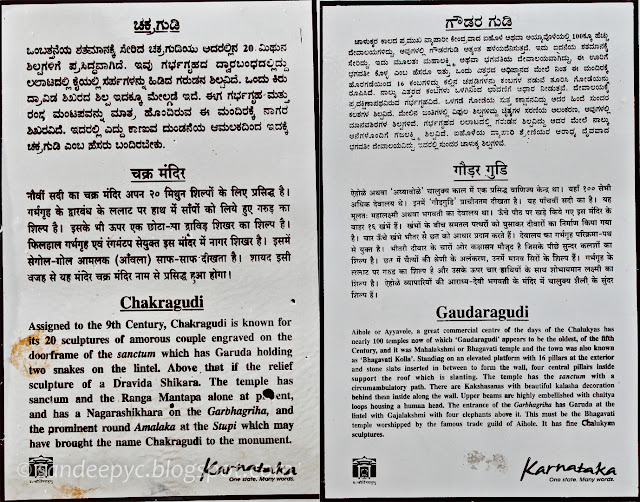